Does the cowardice, incompetence, irresponsibility
& bestial brutality of Putin know no boundaries? …

This is so very similar to the actions of the odious strutting little bully Putin, who it seems is not believed by his own people, merely feared!

Let us not forget the atrocious cowardly behaviour of Joseph Stalin in the murder of some 30 to 50 Million Russian citizens for whom he was leader! Also do remember the facts of Stalin’s Holodomor – The deliberate forced starvation between 1932-’33 that Stalin forced in Genocide of the Ukranian peoples.

We should also remember the war of attrition & Genocide on the part of Germany, whilst led by their strutting self-important Dictator Adolph Hitler. Then of course not only should we remember the industrial nature of the genocide and mass murders in the Death Camps of that regime or the Genocide of the Herrera in GERMAN West Africa.

Also be minded of the mass killings & murders in the Belgian Congo whilst the peoples of The Congo were subjects of King Leopold of Belgium!

Or more recently the behaviour & tribal genocide of Idi Amin as the dictator in Uganda.

Few are spared such genocidal slaughter as one must be minded of the wholesale slaughter of the indigenous peoples of what became the USA or for that matter the high percentage of the population of America in their Civil War in efforts to defend racism and slavery, as recently as the late 1800s.

Then consider the Millions of slaves who were sold to enrich their black masters/owners!

The mass murders of President Mao Zedong of his own Chinese peoples that cost 30 to 50Million lives and the genocide of the subsequent Dictators in China of The Tibetans many Vietnamese and The Uyghur Peoples, will the peoples of Hong Kong be next or those of Taiwan?

This is all so redolent of the delusional behaviour of Putin and his utterly irresponsible war of attrition seeking to steal the land and resources of the independent Nation of Ukraine, which Russia has attacked, besieged and abused for many generations – A Sovereign State in its own right.

Putin has shown the world that his military, using conventional weapons can be defeated by Ukraine and is now irresponsibly threatening the world with the use of Nuclear Weapons to hide his embarrassing failure as a leader.

The ONLY way Putin can now avoid having his failure of leadership and desperate incompetence recorded forever more in history is to use Nuclear Weapons to wipe out civilised mankind & take the planet to the extinction of life or at least to the situation where the few who survive will be smashed back to the stone age.

Snapshots of History
Posted by: Zor An 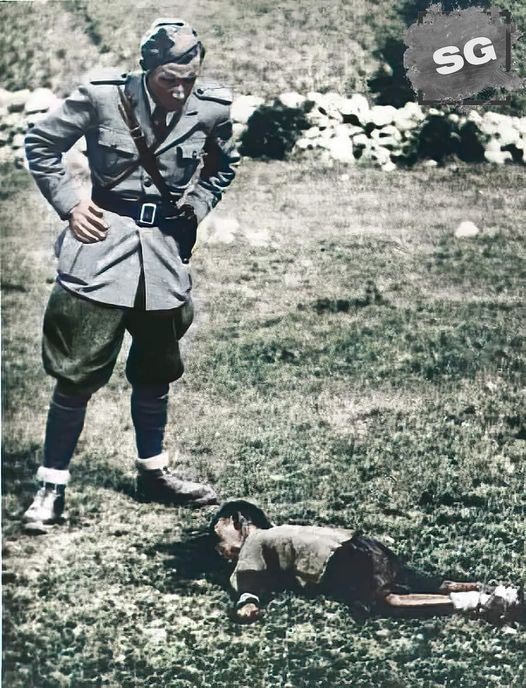 This photo shows Italian General Alexandro Luzano standing above a slaughtered Serbian child in front of a school in Prebilovci. The letter he sent to Mussolini after this crime has been preserved in the military archives:

My boundless devotion to you, I hope, entitles me to deviate in some way from strict military protocol. That is why I hasten to describe to you an event that I personally attended three weeks ago.

While visiting the districts of Stolac, Capljina and Ljubinje (between 60 and 130 km north of Dubrovnik) – I learned from our intelligence officers that Pavelic’s Ustashas had committed a crime in a village (Prebilovci) the day before, and that when it became known , the surrounding Serbs to be upset again.

I miss the words to describe what I found there. In the big school classroom, I found a slaughtered teacher and 120 of her students! No children were older than 12! Crime is an inappropriate and naive word. It overcame any madness!

Many had their heads cut off and lined up on school desks. The Ustashas pulled out the hoses from the torn entrails and, like New Year’s ribbons, stretched them under the ceiling and drove them into the walls with nails! The swarm of flies and the unbearable stench did not allow us to stay there longer. I noticed a torn bag of salt in the corner and was shocked to find that they were slaughtering them slowly, salting their necks! And just as we were leaving, a child’s grunt was heard in the back seat. I send two soldiers to see what it is. They took out one student, he was still alive, he was breathing with his throat cut in half! I take that poor child to our military hospital in my car, bring him back to consciousness and learn the full truth about the tragedy from him.

The criminals first, in turn, raped a Serbian teacher (her name is Stana Arnautovic) and then killed her in front of the children. They also raped eight-year-old girls. During all that time, a gypsy orchestra brought by force sang and hit the tambourines!

To the eternal shame of our, the Roman church, one man of God, one pastor, participated in all this! The boy we rescued recovered quickly. And as soon as the wound healed, with our carelessness, he escaped from the hospital and went to his village to look for relatives.

We sent a patrol after him, but in vain; they found him on the doorstep of the slaughtered house! Out of a thousand or so souls, there is no one left in the village! On the same day, we discovered that later, when a crime was committed at the school, the Ustashas captured another 800 inhabitants of the village of Prebilovci and threw them all into a pit or killed them in an animal way on the way to the pit.

Only about 300 men were saved. Only they managed to break through the Ustasha ring around the village and escape to the mountains! Those 300 survivors are stronger than Pavelic’s most elite division. Everything they had to lose they lost! Children, women, mothers, sisters, houses, property. Even the fear of death is freed.

The meaning of their life is only in revenge, in the terrible revenge of them is, in a way, the shame that they survived! And Herzegovina, Bosnia, Lika, Dalmatia are full of such villages as Prebilovci.

The massacres of Serbs have reached such proportions that many water sources have been polluted in those areas. From a spring in Popovo Polje, not far from the pit into which 4,000 Serbs were thrown, reddish water erupted, I was personally convinced of that! An indelible stain will fall on the conscience of Italy and our culture, if, while the time is right, we do not distance ourselves from the Ustashas and prevent it from being attributed to us for supporting insanity! “