Piers Morgan is back on form. Herewith his view in his column in The Sun on Harry’s performance at Better Up’s virtual conference. 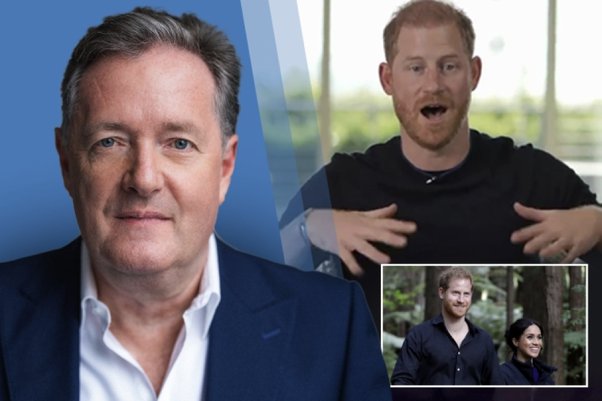 I have cut and pasted the full text of Piers’ column below this paragraph for those who cannot access it online.

“ THIRTY years ago, respected BBC sports presenter David Icke appeared on the late, great Terry Wogan’s chat show in a turquoise shell-suit to inform us he was now “The Son of the Godhead” and the world would end in 1997

Sadly, it turned out he had gone completely bonkers and has since become Britain’s most notorious conspiracy theorist, a Holocaust and climate-change denier who tells people 5G masts spread coronavirus, believes an inter-dimensional race of reptilian beings called the Archons have hijacked Earth and thinks the Royal Family are “blood-sucking lizards”.

I thought of Icke when I listened to Prince Harry’s latest outpouring of gormless gibberish about his favourite subject: Himself and his mental health.

Like The Son of the Godhead, he is someone who we all thought we knew but who has morphed into someone totally unrecognisable.

The charming, ever-smiley, party-loving war hero who so endeared himself to the British people has become a po-faced, puritanical preacher whose constant woke, virtue-signalling, hypocritical claptrap has made him a ridiculous global laughing stock.

Now he’s excelled himself with a new interview in which he reveals he likes to wash his “mental windscreen” during daily 45-minute “me time” meditation sessions, has created a “mental toolbox” to control his erratic nervous system by focusing on “inner work”, gets “schooled by the universe” and spends weekly meetings with a life coach who hones his “mental superpower”.

All of which sounds completely… well, mental.

But the worst bit came when he urged companies to let all their staff have the same experience as him by taking “me time” during office hours to work on their inner selves through meditation and mental health coaching.

“It’s so important as employers to say ‘if you have the chance to do it in your own spare time that’s fantastic’,” he opined, “‘but we are going to factor that into your routine at work’. If everybody was doing that, the shift in global consciousness and awareness would be enormous.”

Hmmm, call me cynical, but why would Harry be pushing this idea so hard?

Ah yes, silly me — he was saying all this in his capacity as the absurdly named “Chief Impact Officer” for BetterUp, the world’s fastest-growing life coaching company that sells app-based employee “mental health and career assistance” and promises to enable its customers to live “more meaningful, vibrant lives with greater clarity, purpose, and passion”.

So Harry, who is reportedly being paid millions of dollars to be Chief Impact Officer, is exploiting both his royal title (without which nobody, least of all BetterUp, would care what he says) and the issue of mental health for vast financial gain both to himself and his employer.

And, like almost everything he and his wife Meghan have done since flouncing out of Britain and royal duty, it stinks of hypocrisy and ruthless commercialism.

After all, these are two people who have effectively disowned almost their entire families and constantly attack them in public, without a care for the damage it might cause to their mental health.

Meghan’s father, Thomas lives just 70 miles away from his daughter’s California mansion but hasn’t seen her for nearly four years and has never met either Harry nor his two grandchildren, something I know from speaking to him causes him huge distress.

And the way Harry has compounded his grandmother the Queen’s heartbreak over the loss of her husband Prince Philip with his outrageous and largely unsubstantiated attacks on the royals and the monarchy has been, frankly, contemptible.

How the hell does any of this qualify the Sussexes to act as the world’s great caring, empathetic therapists?

Their Archewell Foundation, which for all the brand-enhancing publicity it gave them after they launched it raised just £36,681 for charity in 2020, boasts on its website: “Our core purpose is to uplift and unite communities — local and global, online and offline — one act of compassion at a time. We believe that compassion is the defining cultural force of the 21st century.”

Judging by the way they’ve treated those closest to them, these two self-obsessed little chancers clearly have no concept of what compassion actually means.

Like almost everything he and his wife Meghan have done since flouncing out of Britain and royal duty, it stinks of hypocrisy and ruthless commercialism.”

As for Harry’s demand for employees to get extensive “me time” at work, this is not the first time he has shown himself to be absurdly out of touch with the experiences of ordinary people.

Last year, he told anyone unhappy in their job to simply quit if it didn’t bring them “joy” and walk away into the glorious sunset — like he did!

Of course, there’s just one slight problem with that wonderful idea: 99 per cent of the British population doesn’t have a massive inheritance from their mother, a massive allowance from their father going back decades, and the ability to exploit royal status to the tune of hundreds of millions of dollars by trashing their family on global TV and wanging on ad nauseam about their mental health.

And the more he wangs on, the more suspect his motivation becomes.

Last week, Dame Joanna Lumley spoke out against the rising tide of people using mental health as an excuse for life’s normal travails.

She suggested people not suffering from real mental illness, such as suicidal thoughts or clinical depression, should “get a grip” of themselves.

Harry and Meghan live just 70 miles away from her father, but haven’t visited himCredit: Getty

“When someone dies and you grieve, that’s human,” she said. “That’s what being human is, you’re not mentally ill.”

Of course the woke mob savagely attacked Joanna for what she said — there’s nothing more vicious and nasty than the #BeKind brigade — but she was right.

This may sound harsh, but I’m afraid I’ve grown very weary of Harry using his mother Princess Diana’s tragic death as a platform to line his pockets on the back of his “mental health” struggles, and I say that as someone whose own father died when I was just a very young child.

It smacks of the same exploitation of his family that he always accuses the media of doing.

And ironically, it also makes him appear increasingly barmy.

As GB News anchor Colin Brazier tweeted after this train-wreck “windscreen” interview was posted: “Prince Harry increasingly sounds like a candidate for the much-missed Transcendental Meditation Party, whose chief policy involved curing traffic jams by encouraging everyone to levitate through the power of thought.”

When I watch supposedly publicity shy Harry in his frequent media appearances these days, he seems a deeply unhappy person, someone who is endlessly pretending — perhaps even to himself — that he is having a great time with his new-found “freedom” 5,000 miles from Britain, but who gives every impression of now being trapped in the world of vacuous, Hollywood-style celebrity bulls**t so beloved by his social-climbing wife, whose ongoing craving for fame and fortune drips from her every pore.

When they’re not lecturing us all to reduce our carbon footprint as they use Sir Elton John’s private jets like a taxi service, or tweeting us to battle poverty on the same day Meghan threw a $500,000 baby shower in New York, they’re perpetually trying to cancel people such as Spotify podcast superstar Joe Rogan for spreading “disinformation”.

Yet in their Oprah whineathon, they proved themselves to be the masters of spreading disinformation that caused huge damage to the reputation of the Royal Family and the monarchy by branding them a bunch of callous racists without producing a shred of evidence to support such incendiary claims.

Meghan’s ghastly behaviour doesn’t surprise me in the slightest.

From my personal experience of her, she’s a very manipulative creature who will do anything to heave herself up the fame and fortune ladder.

But Harry’s a different matter.

He’s better than this, or at least used to be.

Yet in a year that should be dedicated to celebrating the Queen’s Platinum Jubilee, he is busy finishing off an autobiography that will inevitably ruin it with more royal-bashing tirades.

Doubtless, it will also contain a lot more self-serving moaning guff about his “struggles”.

But I don’t want to hear any more of it, and I’m sure I’m not alone.

I don’t know what the hell’s happened to Harry.

I do know that his incessant rabbiting about his mental health, for huge financial gain, is now damaging MY mental health.

For the love of God, SHUT UP, you privileged little twerp.”