Looks to me as if the #Westminster_Bubble & #London are acting as a foreign country out of touch with the peoples of #Britain & all too willing to betray the #Peoples_Vote #Democracy #Parliament‘s PROMISES & our country for a foreign power – The #EU – DELIVER #BreXit on the 12th. 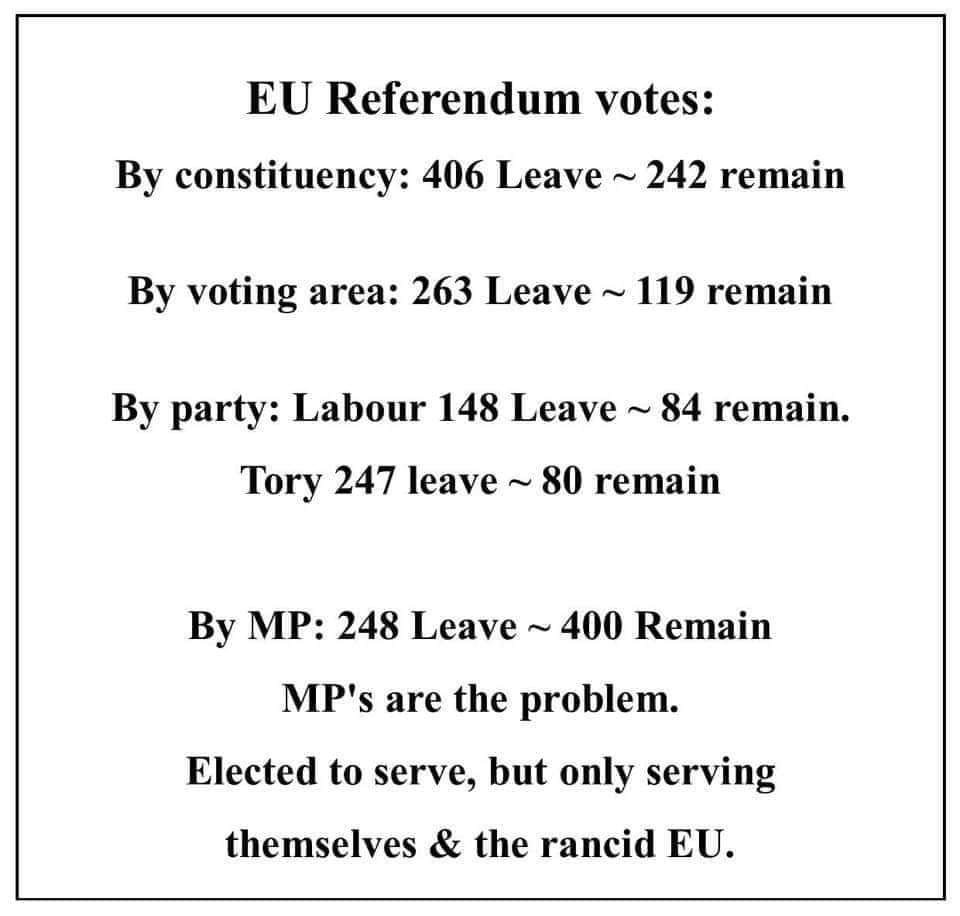 PETER HITCHENS: The TRUE problem with May and Corbyn? They’re far closer than you think

This is Peter Hitchens’s Mail on Sunday column

Theresa May ’s Tories have always been far closer to Jeremy Corbyn than they like to admit. That’s why all their attacks on him fail so badly, and why there is a real possibility that he will become Prime Minister if the Government is idiotic enough to call an Election.

See their recent imposition of compulsory politically correct indoctrination in schools. Their spending and tax levels aren’t much lower than his would be, either.

And, while they go on about Mr Corbyn and the IRA, it is a Tory Government that is ready to let former British soldiers go on trial for actions in Northern Ireland , while IRA killers benefit from an amnesty.

As for Mr Corbyn’s nasty connections with Hezbollah, the May Government’s fervent and crazy support for Al Qaeda fanatics in Syria isn’t really any more defensible. I might add that anti-Semitism is not exactly unknown in dimmer regions of the Tory Party

This is why the Tory assault on Mr Corbyn has been so personal. There wasn’t really anything else left.

Embarrassingly for both Labour and Tories, some of his actual policies are often more sensible than Mrs May’s.

He is, for a start, a lifelong opponent of British membership of the EU, like his hero Tony Benn.

She is a lifelong supporter. Comically, neither of them dare admit their real views openly.

Millions of commuters have come round to his view that the sooner the railways are renationalised, the better.

And everybody now knows he was right to oppose the Iraq War, when both the big-party front benches supported it.

So let’s not get too righteous about the Prime Minister’s attempt to co-operate with him, in the hope of escaping from the hopeless mess we have got ourselves into over the EU.

It is a rare instance, in these times, of politicians at least trying to put country before party. It is not exactly a rerun of Stalin and Hitler’s pact in 1939.

I fear it will fail anyway, but – given the price millions will pay if we mess this up – it was a risk worth taking. I won’t condemn it.

The concrete-headed behaviour of many Tories, who have in the past three years become fanatics in a cause they couldn’t have cared less about in 2010, and still don’t understand, is the reason for this.

Well, no, of course soldiers shouldn’t be using pictures of elected politicians as targets.

But isn’t the more surprising thing, for most people, that there are still British troops in Afghanistan, scene of one of our most hopeless and costly military failures ever.

Bring them home. A country that can’t control knife crime in its own capital has no business sending soldiers abroad.

Morals are a turn-off

Interesting that The Aftermath, a film set in Germany immediately after the war and starring Keira Knightley has sunk without trace.

Could it be that its admission that ordinary Germans suffered terribly from our bombing, and the ultimate refusal of the heroine to abandon her marriage, lacks modern appeal?

The Left-wing magazine Private Eye says the BBC’s drama Call The Midwife has become ‘a series of liberal editorials on medical and social issues’.

A gaggle of pro-abortion groups has praised the programme for repeatedly handling this issue ‘extremely sensitively and courageously’, that is, in a way they like.

Yet the BBC still absurdly denies any bias. A genuinely independent body must be created that can rule on such cases.

One by one, respectable and respected organisations in this country become mouthpieces for the well-funded and cynical campaign for drug liberalisation.

This happens even though evidence of the grave dangers of marijuana grows by the day.

The latest citadel to fall is the Police Federation, a major catch for these people.

Sergeant Simon Kempton, who speaks for that organisation on drug matters, called for an ‘honest and open debate based on results because prohibition has not worked’.

This is the standard fake claim peddled incessantly by the liberalisers, who use the word ‘prohibition’ to make an entirely false parallel between Britain’s drug laws and the failed US attempt to ban alcohol nearly a century ago.

He also made the usual fatuous claim that if police stopped enforcing the drug laws they would be free to pursue supposedly more important crimes.

Actually, the problem is that the police stopped seriously enforcing the drug-possession laws decades ago. And there is no sign that doing so has made them more effective against any other sort of crime. Rather the opposite.

If Sergeant Kempton really wants an open and honest debate on this subject, I challenge him to hold one with me, in front of his members.

A tragedy twisted into a bogus ‘terror plot’

We are told by some police functionary that 10,000 officers are ‘on standby’ in case of unrest. We are told that there is a ‘febrile’ atmosphere.

And about every ten minutes we are reminded of the supposed political assassination of the Labour MP Jo Cox, allegedly by a ‘Right-wing extremist’.

Well, if it’s so febrile, it’s odd that the turnout at Thursday’s Newport West by-election was only about half what it was in 2017. I think weariness, rather than rage, is the most common feeling.

But can we once and for all stop making the absurd claim that Jo Cox’s killer, Thomas Mair, was a serious political actor? First, his killing of a much-loved mother of a young family predictably achieved more or less the exact opposite of what he supposedly intended – and he would have grasped this in a second had he been in a normal state of mind.

In fact his abnormality is the most striking thing about him, despite the fact that it was almost wholly ignored by the police and the courts. News reports from the time repeatedly quoted Mair’s brother Scott as saying that the killer had a history of psychiatric problems.

His half-brother confirmed this, saying Mair would clean himself with Brillo pads and had obsessive compulsive disorder. OCD is often treated with powerful mind-altering drugs, yet I know of no attempt to establish if Mair had been prescribed such drugs.

But there is evidence he had been. He had told a local newspaper in 2010 how volunteering at a park near his home had helped his mental health, saying: ‘It has done me more good than all the psychotherapy and medication in the world.’

Just before his crime, he walked into the Wellbeing Centre in Birstall and asked for help. He said his medication for depression wasn’t working and ‘seemed agitated and treading from side to side’.

After he was caught and charged, his lawyer oddly said he would not bring his medical history into the case. Why not? Plainly Mair is a danger to others and his action was a terrible one. But why does authority ignore such vital facts? Does the Government want to believe, and to spread the idea, that there is some organised Right-wing terror plot?

But it doesn’t suit the corrupt victim agenda the #Labour need to promote to hide their #anti_Semitic #Racist #anti_Democratic #Terrorist_Supporting #anti_British ambitions to gain power by grabbing the tiller of the #Ship_of_State & driving it on the rocks!