We Are Complacent About Our Welfare State & NHS At Our Peril

we all too often treat the NHS and Welfare State with indifference, failing to realise just how dire life was before its inception – a time when the simplest of setbacks in life could shatter a middle class life and plunge entire families into abject poverty and eventual starvation. Malnutrition would be an every day presence in the lives of huge swathes of the population in Britain, without the welfare state.

Innoculations, vacination and even the simplest of medical procedures would be but a didtant dream for the bulk of the population, were it not for the NHS, infant mortality is still much too high, even with the welfare state and NHS but rickets would once again become endemic and we would once again be dependent on having families of 10 – 12 or more to ensure the hope of assistance in ones old age.

When one appreciates that the 1909 Pension Act is in large part responsible for Britain’s irresolvable £Trillion debts one starts to realise just how thin the veneer of modern life really is. Ask a Syrian if they could have envisaged the life they lead today, or the life led by the unfortunate peoples of Libya – aided in the collapse of their standards of living by a vendetta by the west to prevent the burgeoning of the Gold Dinar as a challenge to the supremacy of the $US as bthe reserve currency of choice globally.

Life in cosmopolitan Lebanon in the late 1960s was a life of plenty a dream shattered by the war forced on Palestine by the occupation of their land by Zionists to create the new state styled Israel – a similar happenstance to the collapse of the Ukraine and the civil war that was resultant from the interference and inept ambitions of the EU and the perceived dangers of NATO to the Russians threatening their stability as they emerged from Communism; an interference that set back Russian liberty and the natural demise of Communism by a generation at least.

The hard won legacy of our fathers and forefathers to create a Welfare State and the jewel in its crown with the NHS is today teetering on a knife edge, facing cuts and pressures from immigration and the failure to invest enough in the training of nurses and doctors, such that it may not survive under the burden of debt left as Blair and Brown’s legacy.

One wonders just what percentage of our population realise just what a gift the welfare state has been and an even smaller percentage seem to realise just how fragile that structure is – especially when one considers the ease with which the gullible can be duped into demonstrations and protests against the unavoidable areas of austerity we face – austerity made ever more endemic to our way of life as a result of our misguided and damaging membership of the EUropean Union, which we were duped, at a time of 3 day weeks and ever popular strickes, into using both as a crutch and as a cudgel to regail control of our governance, all be it by a very allien outside force.

Now however if we are to see our welfare state survive and our NHS rejuvenated it is imperative that we consider our own well being first and foremost, liberated from the shackling effects of the EU and able to govern in our own interests.

In a relatively recent Christmas special of “Call the Midwife”, in what was very much an object lesson against our own complacency, they covered the tragic story of Mrs Jenkins.

It was toned down from the full story in the book – a story that was far too heart-breaking for broadcast as what is largely light weight entertainment as one finds on TV. The trilogy of books titled ‘Call The Midwife’ by Jennifer Worth are reminiscences of her life and training as a midwife in the 1950s only some 60 years ago – a training where she met Mrs. Jenkins, and many like her with similar horrific tales of the days before the welfare state and the NHS.

Mrs Jenkins had six children when her husband died early in the 20th. century, only some 30 years earlier.

There was no welfare state so she took her eldest, a daughter of ten, out of school to look after the younger ones, whilst she worked. The she and her eldest daughter took in sewing, to eke out their inadequate income.

Then an industrial injury to her arm, for which there was no compensation, resulted in her losing her job.

The sewing didn’t bring in enough money to support her and her family, thus she and her children were evicted from their home. Having already sold her teeth and her hair for money, she was forced to turn to the parish for help but the trustees told her she was “workshy” and denied her any help.

They had nothing and when the youngest, still not even a toddler died, she found a box and committed his body to the river Thames.

Eventually as the health of her starving children failed, she was forced to do something she dreaded.

The family turned up at the workhouse.

As they waited in the reception room she hugged them knowing, as they didn’t, that they would be separated. She never saw any of them again.

She was released from the workhouse when it closed, as with all the workhouses, in 1935, when her mind was shattered by her experiences of life.

Not one of her five remaining children lived – they all died either from pneumonia, tuberculosis, influenza or “failure to thrive”, maladies that stalked society at all levels prior to the welfare state and NHS, Mrs. Jenkins’ last to die was her eldest. 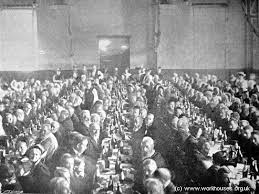 She wasn’t allowed to see their bodies nor attend their funerals, a concept hard for us to believe in this age when society seems willing to pay £Millions to effect closure trolling the Indian Ocean for months on end seeking clues to the death of those on Malayan Airways or even more indulgently seeking the body dead or alive of Madeleine McCann!

In the fifties, the midwifes and nuns had seen, the now aged, Mrs. Jenkins around in the east end of London, but didn’t know her story. She loved babies, but the mothers didn’t like this old, dirty, shambling figure around them and shooed her away.

She walked strangely because, it was later discovered, her toenails had grown to over 12 inches long.

When the nurses came to tend her, they had to cut her boots off. They bathed her, sent her to a specialist to cut her nails (which remain today in a London museum) and gave her second hand clothing. She tried to refuse it: “that’s too good for the likes of me, you keep it”.

She couldn’t believe that she could see a doctor free of charge; the NHS was a miracle, the money from the new welfare state a literal life saver. A welfare state and state health service which was not only inovational, based on Lord Beveridge’s Report but also was for many years the envy of the world.

All this has been put at risk, firstly by subtle ammendments to the Beveridger Report made by the scurrilous early champagne Socialist Aneurin Bevan and his Communist wife Jenny Lee, wheereby the NHS was politicised but later in its life as the NHS increasingly became a a National Lifestyle Service.

A Service pandering to political need and political greed, to buy votes and even more recently as it was exposed to privatisation by the 13 unlucky years of Socialist misrule and economic illiteracy under Blair & Brown, where many Hospitals were sold off and new developements were instigated, by plunging the NHS into insoluable debt, with PFI (Private Finance Initiatives) – which more rightly stood for Profligate Financial Inovations!

We should further risk the Welfare State and NHS at our peril, as the consequences may prove catastrophic. Already it is debatable if the NHS can survive the tampering of Aneurin Bevan when he was charged with setting it in place as agent for all 3 parties at the time, nor whether it can weather the profound damage done by Blair & Brown by borrowing against the service so heavily the repayments deeply cut into its budget, or can it survive the failure through many governments to provide adequate training, such that now we find ourselves stealing medical staff from those Countries which can least afford to loose such assetts such as the Philipines, India and Africa!

Of all our National Treasures it speaks loudest of our aims and aspirations – we must strive to save our Welfare State, which can best be served by sound efforts to ensure against the industrial levels of tax avoidance & evasion by corporations and the wealthy and those exploiting overseas tax havens and loopholes

whilst the poor claiming dependence on the Welfare State must be rigerously patrolled – The NHS on the other hand can best be served by a cut in management costs, a transfer of management to the medically trained, an emphasis on training and some method of assisting in coping with the debts incurred by Blair & Brown meanwhile making dramatic savings by concentrating the service on National Health and paring away the excesses of lifestyle treatments!

Already much of the Dental Service has drifted back into private hands where many can no longer obtain NHS cover nor afford private treatment. As with opticians and although those simple NHS specs were far from fashion accessories

all could have their glasses supplied by the service!