David Liddington led the debate on this all important subject that all 3 of the UK parties have in one form or another promised a Referendum on – Our membership of The EU.

ALL Political Parties in Britain have not only reneged on their promises but have lied and duped the public, leading to a loss of the relevance of our Government at Westminster and the irrefutable FACT that the overwhellming majority of our laws made at Westminster are either all but irrelevant regulations made independently which MUST comply with EU Law or the rubber stamping of EU Diktat over which we have absolutely no fundamental right of self determination.

That the Home Secretary Presented the bill’s third reading which though it had 30 hours of committee hot air and now a 2.1/2 hour 3rd. reading that at times was considered so irrelevant by our highly salaried MPs that there were less than 15 in the chamber and a mere 4 on the opposition benches.

It seems they can only fill The House when it is time for irrelevant knock about games of PMQs or to discuss their own salaries. I well recall a Defence Debate of import with 9 MPs present!

Bill Cash raised the fact that membership of The EU had resulted in losses of some £128 BILLION as a result of EU over regulation of businesses in Britain and as John Redwood‘s intervention showed that control and financial controls of The City of London was now passing to The EU.

Bill Cash and John Redwood both spoke in favour of an IN/OUT Referendum  and William Hague clearly spoke showing disatisfaction with EU membership as it now stands and leading one to believe he would incline to leave rather than continue if change can not be achieved.

Remaining stages of the European Union Bill
being debated in the House of Commons. 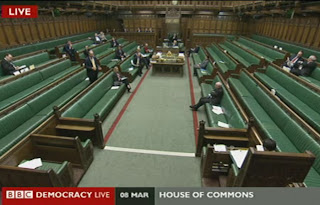 The bill forces a national referendum on any EU treaty changes that move power or responsibility for policy from the UK to Brussels.
However, ministers could rule out a referendum if they judged that the power transfer was “not significant”.
The minister’s decision would have to be made within two months of any treaty change and it would be open to challenge via a judicial review.
Labour claims this could create “a lawyers’ paradise”, potentially allowing the courts to override decisions taken in Parliament, which the government denies.
Foreign Office minister David Lidington described the bill was “a radical piece of legislation to improve how we handle European business”.
But Tory Eurosceptics do not believe it goes far enouEuropean Union Bill are being debated in the House of Commonsgh, questioning the powers that ministers have to rule out a plebiscite.
The legislation would apply UK-wide.