Skip to content
Date: 03/03/2011Author: Greg Lance - Watkins (Greg_L-W) 0 Comments
#G0422* – EU Regional Assemblies – Wales, Scotland, East Midlands etc.
To understand what an Assembly for Wales, or any other of the 12 silly little Regional Assemblies, will really mean requires reading the relevant Articles
[263 – 265] of:
The Consolidated Treaty Establishing
The European Community,
Title II, The Treaty Establishing The European Community, Part Five, Title I, Provisions Governing The Institutions, Chapter 4, The Committee Of The Regions:
ARTICLE 263 (ex Article 198 a)
A Committee consisting of representatives of regional and local bodies, hereinafter referred to as ‘the Committee of the Regions’, is hereby established with advisory status.
The number of members of the Committee of the Regions shall be as follows:
Belgium 12; Denmark 9; Germany 24; Greece 12; Spain 21; France 24; Ireland 9; Italy 24; Luxembourg 6; Netherlands 12; Austria 12; Portugal 12; Finland 9; Sweden 12; United Kingdom 24.
The members of the Committee and an equal number of alternate members shall be appointed for four years by the Council acting unanimously on proposals from the respective Member States. Their term of office shall be renewable. No member of the Committee shall at the same time be a Member of the European Parliament.
The members of the Committee may not be bound by any mandatory instructions. They shall be completely independent in the performance of their duties, in the general interest of the Community.
ARTICLE 264 (ex Article 198 b)
The Committee of the Regions shall elect its chairman and officers from among its members for a term of two years.
It shall adopt its Rules of Procedure.
The Committee shall be convened by its chairman at the request of the Council or of the Commission. It may also meet on its own initiative,
ARTICLE 265 (ex Article 198 c)
The Committee of the Regions shall be consulted by the Council or by the Commission where this Treaty so provides and in all other cases, in particular those which concern cross-border co-operation, in which one of these two institutions considers it appropriate.
The Council or the Commission shall, if it considers it necessary, set the Committee, for the submission of its opinion, a time-limit which may not be less than one month from the date on which the chairman receives notification to this effect. Upon expiry of the time-limit, absence of an opinion shall not prevent further action.
Where the Economic and Social Committee is consulted pursuant to Article 262, the Committee of the Regions shall be informed by the Council or the Commission of the request for an opinion. Where it considers that specific regional interests are involved, the Committee of the Regions may issue an opinion on the matter.
The Committee of the Regions may be consulted by the European Parliament.
It may issue an opinion on its own initiative in cases in which it considers such action appropriate.
The opinion of the Committee, together with a record of the proceedings, shall be forwarded to the Council and to the Commission.
In short that pretentious load of Eurospeak boils down to Wales will have no authority, no say, no representation & there will be 444 extra representatives to pay for in Europe. Plus, of course, all their staff and all their expenses – but no more democracy and no more control over the un elected dictator committee – the European Commissioners.
Let us look at what it means point by point:
Let us assume that what was the United Kingdom decides to give two memberships on this new Committee and two alternates to each of the twelve economic regions, in the British economic subsidiary region of Europe. Wales would then have two votes, in isolation, out of 222 votes on the Committee of the Regions, less than 1% influence. To add insult to injury MEPs representing Wales are outnumbered 100 to 1 in the European Parliament, less than 1% influence again. This is what being master of ones own destiny and having an Assembly for Wales means for the people of Wales and every other, of the 12, economic regions in Britain.

There are some, I am sure, who honestly believe that an Assembly for Wales is a good idea for Wales. Some will welcome the removal of benevolent control, albeit sometimes misguided, from Westminster – surely they can not welcome direct rule by the un elected dictator committee that rules Europe, the European Commissioners. Some may feel that two more tiers of Government will help Wales, I can not for the life of me see how – the more tiers of Government the further from the electorate decision

If you require further assistance or information, for the defence of Britain, please do not hesitate to contact us:
Greg Lance – Watkins.


To view the original of the article above CLICK HERE

It is also worth reading Dr. Richard North’s comment on the idiotic and self destructive Referendum in Wales today 03-Mar-2011 – what was the story about the mad March hare where they squabble and fight for dominance! 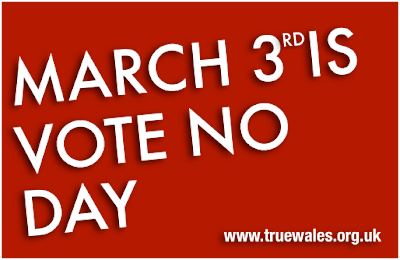 Did you know that there was a referendum today on whether the Welsh Assembly should be given law-making powers?The fact of the referendum, the reasons for it and the consequences, have been the object of almost total silence within the province, many people with the misfortune to live in Wales being unaware of the referendum. Is it believed that the silence is deliberate. This is a measure that even on a good day would be unpopular. The less people know of it, therefore, the more chance its self-interested supporters have of getting it through.As for the rest of the UK, although this is called devolution, it is yet another step in the dissolution of the Union – the United Kingdom, that is. That, of course, means another step towards the creation of the Europe of the Regions, part of that greater European Union. The process of regionalisation started as a parallel model for the political integration of Europe, and has since been absorbed into the mainstream. Creation of strong(er) regional entities, with direct ties to the supranational centre (Brussels) weakens the power and authority of the national government.The bizarre thing is that it does nothing to enhance democracy or local accountability. It simply adds – and in this case strengthens – yet another, more intrusive layer of government and confuses lines of responsibility and authority … which is, of course, part of the game.Anyone really interested in democracy would be pushing enhanced powers to local authorities – including genuine tax-raising powers and, indeed, law-making powers. Local authorities used to have such powers, exercised by way of by-laws, and local Acts. Many of the issues which are currently regulated by national British regulations and now EU law started off their lives as by-laws. No longer can such a degree of local autonomy be permitted by our masters. In the Orwellian world of the Perfect Union, devolution means more centralisation. More “democracy” means less democracy. That is what was always intended to be, even if there are some people stupid enough to believe otherwise. That is why those who are aware of the referendum and who understand what it is really about will be voting “no” today.

“In politics, stupidity is not a handicap.” Napoleon Bonaparte (1769-1821), Regards, Greg L-W. for all my contact details & Blogs: CLICK HERE British Politicians with pens and treachery, in pursuit of their own agenda and greed, have done more damage to the liberty, freedoms, rights and democracy of the British peoples than any army in over 1,000 years. The disastrous effects of British politicians selling Britain into the thrall of foreign rule by the EU for their own personal rewards has damaged the well-being of Britain more than the armies of Hitler and the Franco – German – Italian axis of 1939 – 1945.