I feel a bit like Robin Horbury here, who writes a fine piece on Biased BBC himself complaining about feeling like a “cracked record”. You can only keep on saying the same things over and over again for so long before even you get tired of your own voice.

Another thing I also get a little bit tired of is being branded the “bad sod”, the one who is always out on his own, who can’t join in and put his weight behind the common cause.

That much has been put to me about the Referendum Campaign and also the anti-EU campaign in the Daily Express, which has culminated in the publication today of a 23-page booklet, telling us that we must, “Get Britain out of the EU”.

It is not, of course, that we do not agree with the sentiment, but the front cover tells you everything you need to know about the eurosceptic thinking in this country. Redolent of the famous 1940 Low cartoon (inset below), it has the trademark Express crusader standing on the cliffs of Dover, looking out toward the Continent – where (by inference) the “enemy” exist.

And here the “cracked record” comes in. The EU is not a foreign construct imposed on us. Our government is an enthusiastic part of the EU nexus and the only reason we are in the EU is because Parliament permits it. It is not looking over the Channel to the Continent that our brave crusader needs to be doing. He needs to be looking inwards, tearing down the gates of Westminster. The enemy is within. 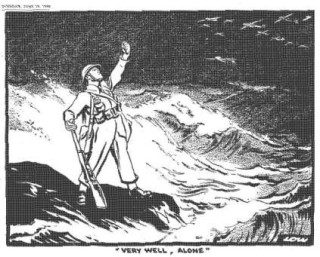 That said, if there was any doubt that the Express had lodged itself in the last century, we just need to read the offering from editor Peter Hill, where the tone – and content – would be familiar to anyone who had attended UKIP meetings … of the ’90s.

All the buzz-words are there, “sovereignty”, the mandatory reference to “Napoleon” and “Hitler”, the “wine and milk lakes” and the “butter and grain mountains”, not forgetting, of course, the swipe at the “superstate”.

I have written too many pieces on this blog about the fate of euroscepticism to want to repeat them, but in the forty years, on an off, that I’ve been fighting the EU, I would like to think I’ve learnt a thing or two about the enemy, and how to fight it.

Mr Peter Hill of the Express, however, doesn’t appear to have learnt a thing, and the eurosceptic movement is a moribund as ever if that is the best it has to offer. In that sense, the movement itself is the cracked record, endless repeating the same tired, jaded message, while the world carries out without it.

We have to be capable of doing better than that and, until we can, I want no part of it.

You will note the title of this article is:
08-Jan-2011 – I TOTALLY SUPPORT Richard’s Comment re EUroScepticism BUT!

NOW for the ‘BUT’ – yes I do agree with Richard however I find myself in the position where age and health are taking their toll on my time/energy to fight the good fight, not for myself as I have enjoyed my life and made much of it BUT because I feel I should do all I can to give the future a chance – something I increasingly KNOW it does not have, unless those of the future value increased overpopulation mostly due to over copulation!

In my lifetime ie since 1945 the human population of this planet has risen, so far, from just a tad under 2 Billion people to just short of 7 Billion – of course this has led on its margins to the stripping of forests to build and to create more agricultural space and living room.

The disastrous effects of British politicians selling Britain into the thrall of foreign rule by the Franco-German Axis of The EU, for their own personal rewards, has damaged the well-being of these United Kingdoms more than the armies of Hitler and the Franco – German – Italian axis of 1939 – 1945.

First things first – perhaps someone can explain why in Communist China 28% of economic activity is that of The State yet in Britain we now have 53% of economic activity and employment State controlled yet we have absolutely no say over our destiny and are denied the fundamental human right of Self Determination.

When will we be accorded that fundamental human right, when will Democracy be re-patriated, when will we have the right to vote to determine our own future.

When will we have our IN or OUT Referendum on membership of the malign, malevolent and staggeringly damaging Evils of a centralised undemocratic EUropean Union.

It has always been said that the difference between a terrorist and a freedom fighter when he blows up and kills substantial numbers of an authoritarian political class is that the terrorist has access to a ballot box but a freedom fighter does not and thus his actions are honourable.

Since we are clearly denied the access to the ballot box on the ONE AND ONLY issue that matters when do YOU consider blowing up a gathering of Politicians would be acceptable?

For a self styled and self serving Political class to set rules as to what WE whom they supposedly serve should be allowed to vote on they have clearly lost the plot and it starts to look as if they NEED to be blown up.

I do agree with Richard when he states he can not choose to be associated with the limp wristed misrepresentation of the fact that The EU is NOT our enemy – our enemy are those who betray us at and via Westminster – You will note they cleverly removed the Treason Laws and in 1998 finally removed the death penalty for their criminal behaviour!

Unlike Richard I find I lack the courage to stand nobly by and watch my Country being destroyed and therefore I have chosen to conjoin with what can only be described as the lesser of the evils and use the weak and wishy washy to point out the undeniably corrupt and dishonest. Perhaps I can help put lead in the pencil of the pusillanimous! I can but try in what time energy is granted to me 😉

When is our Referendum and the RIGHT to self Determination and failing that when shall we start hanging Politicians from lamp posts. Obscene as the action was let us for a moment think of Gabrielle Giffords fighting for survival after finding herself the victim of some crazed youngster encouraged it seems by her having been in the ‘Cross Hairs’ of Sahra Palin’s utterly irresponsible self interested advertising campaign where Congress Woman Gabrielle Giffords was featured as a target, overlayed with the Cross Hairs of a rifle sight!

Gabrielle Giffords’ crime was not selling out her Country and her peoples to foreign rule and profligate centralised governance of a wholly debased and alien nature but actively voting, with the best of intentions, for Health Care for all!

The disastrous effects of British politicians selling Britain into the thrall of foreign rule by the EU for their own personal rewards has damaged the well-being of Britain more than the armies of Hitler and the Franco – German – Italian axis of 1939 – 1945.
Make your vote count vote:
INDEPENDENT Leave-the-EU Alliance
or Write on YOUR ballot Paper
LEAVE-THE-EU