#G188* – Postulating The Outcome IF Lisbon Is Enacted 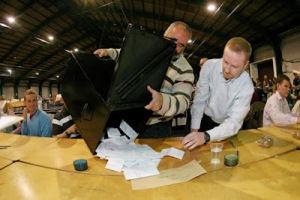 Up until now since its inception as a series of White Papers issued by The british Government as a solution to the restructuring of a largely broken CONTINENTAL Europe:

The EU experiment has grown insidiously in a regular series of ‘salami slices’ as the barbed wire circle of stars has ratchetted ever tighter around the neck of freedom first of the Nation State and increasingly of the peoples in thes vassal regions.

Until about 15 years ago this ratchet effect was similar to the frog analogy:
You put a frog into a pan of cold water and it will swim around merrily and as long as you raise the temperature slowly and steadily you can raise the temprature to boiling point and the frog will merely die and be cooked, without realising as its blood temperature rises with its surrounds being a reptile.
If you put a frog in a pan of warm water it will immediately make an effort to get out.

The incremental ratchetting of the EU has left most people, like the frog, blissfully unaware of just how far they are being taken over.

The enactment of the Lisbon Constitutional Treaty for the first time moves the EU into a politically controlling ‘In Your Face’ position.

Whilst the EU was all but invisible with the occasional error such as metrication, 40ton axle loadings, EU arrest warrant to name a few the peeople unfortunate enough to be in its thrall fell into three groups:

01./ EU devotees known as EUroPhiles – who were rabidly in favour and were being bribed ever more to act as its salesmen – MEPs for example who undertake on appointment to represent The EU’s best interests NOT their electorate or Country/Region.

02./ The lobotomised masses with their footie, racing, soap opera, beer, sex and comfort bought with a false salary per output and unsustainable borrowing – this constitutes the huge mass who are indifferent to politics, beyond moaning and who barely noted whether they were dancing to the tune of the Tally man, the bank, the bills, the Mrs., need, comfort or Government – whoever that may be!

03./ The EUroRealists a small but growing body of informed active and patriotic opponents of the experiment – all too well aware of the freedoms being lost and the ratchet effect as the EU took ever more incremental control as they watched the authority of their particular Oireachtas, Westminster, Bundestag wither and their political elite succumb to the cebtralised bribe structure.

Lisbon will, if enacted increasingly stir up the huge body of peoples in group 02. increasingly the details of the hoops they have to jump through will inevitably politicise them – the inevitability of rising food prices and falling incomes, rising joblessness and the inevitable rise in crime and heavy handed policing.

This will move a huge tranch of the 02. intellectually & politically EUthenased masses across a widening EUroSceptic bridge and as they learn more will become fully fledged EUroRealists.

To counter this the 01. EUroPhiles will seek to enlarge the bribe zone by mopping up a burgeoning middle class unemployable zone by ever greater QUANGOcracy of NGOs and the promotion of the new State Religion of guilt of an almost Catholic proportion at Anthropogenic Global Warming & Climate Change increasingly becoming barking mad in their desparation to hang onto their place at the trough!

By this process and minded that the entire world lives on a margin of 5% in terms of food production The EU is confronted with the incompetence and profligacy of its CAP, catastrophic missmanagement of The CFP and as output falls whereby for the first time in modern history the whole of Europe is a nett food importer but with a falling export and profit bases as it shrinks its own market by over management and erradication of natural competition.

The reality of global cooling which has been proven to pertain over the last 9 years and a period of climatic change, most probably caused by plate techtonic shift, could well wipe out that 5% margin in a single year – there will be those old enough to remember the appauling and savage famine that stalked the central planes of EUrope immediately after the last major EUropean war in the winter of 1945/6.

A famine that was so deep that without American aid the death toll could have reached 50% – a period when a small bar of chocolate would be shared out by a Mother and would buy the sacrifice of sex with any of her children.

Had the winter of 1946/7 come one year earlier the death toll would have made the Stalingrad Seige seem like a picnic.

I do not believe that The EU is an experiment worth risking – particularly in a period funded on credit and dwindling monetary faith as America’s Dollar teeters on the brink having lost 14% of its value in a matter of weeks without sign of recover let alone cause to create it!

Lisbon moves The Politically controlling aspect of The EU experiment high profile and it can no longer be pretended that anyone but the central EU governs any of the vassal states. The EU has moved into YOUR sitting room with Lisbon – your now defunkt National Government can no longer decide on what light bulbs you buy!

The full weight of the 120,000 rules and regulations now fall on YOUR back to bear.

How long before even the yes voters are scuttling in anonimity across that EUroSceptic bridge to EUroRealism.

IF Lisbon is enforced will that be the EU’s Death Knell?