life used to be so very simple.

You walked into a room flicked a switch and hey presto instant light – when you left you just flicked it off.

The light was bright enough to read by and if you needed a brighter light you could use a spot light or a stronger bulb. 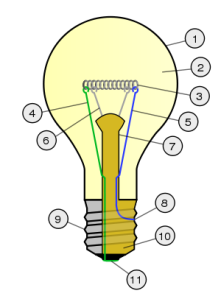 Wonderfull, simple – even I could understand it without phoning my techno friend who has a habit of starting with the history of the flint spark and slowly working up to date if you want to know anything about electric.

As for asking the time I’m still waiting he has only got as far as the chain operated pocket watch fusse, or some such. I keep reminding him I’m 63 and I only wanted to know the time to boil an egg!

(If you only want a 3 minute egg – yeah yeah I’ve heard that joke and if you haven’t ask your partner but duck fast!)

Interestingly the Guinness Book of Records shows the oldest of these very simple bulbs is OVER 107 years in use.

Isn’t it great I’ve just bought one of those idiot energy absorbing bulbs called a CFL – I’m told it stands for Compact Flourescent Light but has more meaning as Completely F******* Lousy.

Never mind my good old steady dirt cheap to produce and simple edison light bulb died and so I safely dumped it in the trash.

My new wonder bulb glowing in the corner looked just like this except it was a simple bayonet fit: 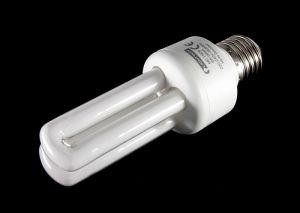 According to the box which is covered in totally unreadable ‘stuff’ not only because it is in tiny weenie print but the bulb doesn’t give off sufficient glow!

Another staggeringly unhelpfull point is it is in every language from Hebrew to Haaka, Mandarin to Manglish, Arabic to WHO CARES no one ever reads it as there is never a microscope set up and a simple magnifying glass won’t work if you are over 9!

One fact I did gleen (because it was done in a multi linguistic dialect of Idiot (pictures) this bulb will last me 6 times as long as The Edison bulb – isn’t that great if it rivals the record for an Edison bulb I will be 705 years old when it finally plunges me into darkness!

Well NO – eight YES 8 days later flicker dim, dim yes dim that is even dimmer than it was when new and useless – to be fair because I gather it takes a fair amount of electricity to go from off to glimmer when new I’ve given up turning off lights in my house – I just don’t have the patience to hum The Ode To Vomit in memory of the EU every time I turn a light on and wait for it to glow enough that I don’t stand on the cat! 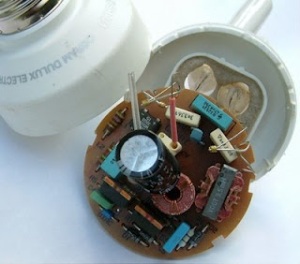 Sort of just like the picture – I totted up 18 basic components to go wrong and 48 soldered joints on a complex printed circuit.

No wonder something went wrong – a piece of kit is as reliable as its least reliable part! You know chain and weakest link and all that.

So I started thinking – just how much of a liar do you have to be to believe that producing 18 electronic components, circuit board, tube, wiring, joints fixings, circuit boards, printed circuits, wave soldering and a whole lot more junk to make it work.

There is no way this can be either energy saving nor can it be non poluting.

So I head off to the internet and what do I find – besides the FACT that these CFLs constitute a HAZARDOUS waste.

So I found a leaflet: 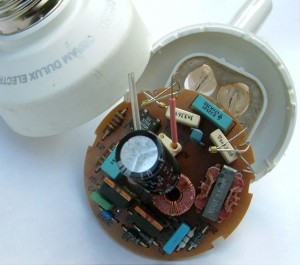 There is Mercury in these Mothers! Last time I was anywhere near Mercury someone was sticking it under my tongue to take my temperature! Oh no you ain’t just ‘cos it won’t fit under my tongue!!!

So back to the internet because I just can’t see these ridiculous CFL things make one iota of sense on any grounds whatsoever.

Just what is the benefit of this rubbish when what you wanted was a simple light bulb!

So back to the internet and I found this video which tells me all I need to know about this Government super scam.

Why exactly is so much energybeing used to make these silly things – especially as they don’t work as light bulbs in any realistic meaning of the word.

As with so much else foist on us by our self serving scoundrels in politics and the Snivil Cervants who repeatedly betray us at ever greater cost – most of which seems to be being used to stuff the pockets of Politicians and the pension funds of The QUANGOcracy and Snivil Cervants – linked to insure against their own utter incompetence, whilst your pension gets trashed and you are penalised for prudency or saving.

How long before there is a Politician or some little creep from Local Government hanging from a lamp post near you.

This level of treachery and betrayal has seen Politicians parted from their heads with an axe in the past – they way they behave nowadays they are unlikely to miss their heads anyway. Do YOUI know ANYONE who isn’t/wasn’t a Politician or a Banker who DIDN’T see the impending currency collapse following in quick succession after the Credit Collapse we ALL knew was coming?

May you live through it – albeit in the dark as the power stations start to drop off line because the Politicians made no plans for Nuclear Power Stations THE ONLY way we can produce viable clean energy sufficient for the modern life we are on the verge of losing!

Do YOU believe any of these new bulbs will match up to this:

This bulb rolled off the production line in 1883 when Queen Victoria was on the Throne and Gladstone was Prime Minister.

It continues to light the home of Beth Crook, 79, in Morecambe, Lancs.

It was one of the earliest products of the Ediswan factory a collaboration between the British Physicist Sir Jospeh Swan and American Thomas Edison.