WHAT IS THE MOTIVE FOR THE WARMIST LIES? (G042)

WHAT IS THE MOTIVE FOR THE BBC & MUCH OF THE MSM TO PROMOTE THE WARMIST LIES?

I CAN UNDERSTAND THE MOTIVE OF KONTROL FROM POLITICIANS THAT THE PUBLIC NO LONGER RESPECT!

Politicians find it hard to kontrol if those they seek to control are not surrendering their freedoms from fear. If politicians can not convince the peoples there is something to fear politicians have nothing to offer! 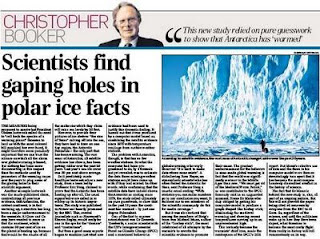 Despite the hot air,
the Antarctic is not warming up

A deeply flawed new report will be cited ad nauseam by everyone from the BBC to Al Gore, says Christopher Booker.

The measures being proposed to meet what President Obama last week called the need to “roll back the spectre of a warming planet” threaten to land us with the most colossal bill mankind has ever faced. It might therefore seem peculiarly important that we can trust the science on which all the alarm over global warming is based, But nothing has been more disconcerting in this respect than the methods used by promoters of the warming cause over the years to plug some of the glaring holes in their scientific argument.

Another example last week was the much-publicised claim, contradicting all previous evidence, that Antarctica, the world’s coldest continent, is in fact warming up, Antarctica has long been a major embarrassment to the warmists. Al Gore and co may have wanted to scare us that the continent which contains 90 per cent of all the ice on the planet is heating up, because that would be the source of all the meltwater which they claim will raise sea levels by 20 feet.

However, to provide all their pictures of ice-shelves “the size of Texas” calving off into the sea, they have had to draw on one tiny region of the continent, the Antarctic Peninsula – the only part that has been warming. The vast mass of Antarctica, all satellite evidence has shown, has been getting colder over the past 30 years. Last year’s sea-ice cover was 30 per cent above average.

So it predictably made headlines across the world last week when a new study, from a team led by Professor Eric Steig, claimed to prove that the Antarctic has been heating up after all. As on similar occasions in the past, all the usual supporters of the cause were called in to whoop up its historic importance. The paper was published in Nature and heavily promoted by the BBC. This, crowed journalists such as Newsweek’s Sharon Begley, would really be one in the eye for the “deniers” and “contrarians”.

But then a good many experts began to examine just what new evidence had been used to justify this dramatic finding. It turned out that it was produced by a computer model based on combining the satellite evidence since 1979 with temperature readings from surface weather stations.

The problem with Antarctica, though, is that has so few weather stations. So what the computer had been programmed to do, by a formula not yet revealed, was to estimate the data those missing weather stations would have come up with if they had existed. In other words, while confirming that the satellite data have indeed shown the Antarctic as cooling since 1979, the study relied ultimately on pure guesswork, to show that in the past 50 years the continent has warmed – by just one degree Fahrenheit.

One of the first to express astonishment was Dr Kenneth Trenberth, a senior scientist with the UN’s Intergovernmental Panel on Climate Change (IPCC) and a convinced believer in global warming, who wryly observed “it is hard to make data where none exists”. A disbelieving Ross Hayes, an atmospheric scientist who has often visited the Antarctic for Nasa, sent Professor Steig a caustic email ending: “with statistics you can make numbers go to any conclusion you want. It saddens me to see members of the scientific community do this for media coverage.”

But it was also noticed that among the members of Steig’s team was Michael Mann, author of the “hockey stick”, the most celebrated of all attempts by the warmists to rewrite the scientific evidence to promote their cause. The greatest of all embarrassments for the believers in man-made global warming was the well-established fact that the world was significantly warmer in the Middle Ages than it is now. “We must get rid of the Mediaeval Warm Period,” as one contributor to the IPCC famously said in an unguarded moment. It was Dr Mann who duly obliged by getting his computer-model to produce a graph shaped like hockey stick, eliminating the mediaeval warming and showing recent temperatures curving up to an unprecedented high.

This instantly became the warmists’ chief icon, made the centrepiece of the IPCC’s 2001 report. But Mann’s selective use of data and the flaws in his computer model were then so devastatingly torn apart that it has become the most comprehensively discredited artefact in the history of science.

The fact that Dr Mann is again behind the new study on Antarctica is, alas, all part of an ongoing pattern. But this will not prevent the paper being cited ad nauseam by everyone from the BBC to Al Gore, when he shortly addresses the US Senate and carries on advising President Obama behind the scenes on how to roll back that “spectre of a warming planet”. So, regardless of the science, and until the politicians finally wake up to how they have been duped, what threatens to become the most costly flight from reality in history will continue to roll remorselessly on its way.

Not the least shocking news of the week was the revelation by that admirable body the Taxpayers Alliance that last year the number of “middle managers” in Britain’s local authorities rose by a staggering 22 percent. Birmingham City Council alone has more than 1,000 officials earning over £50,000 a year. All over Britain senior council officials are now earning salaries which 10 years ago would have seemed unthinkable.

Future historians will doubtless find it highly significant that just when Britain’s economy was about to collapse, an already hopelessly bloated public sector was expanding faster than ever. One of the more dramatic changes in British life over the past two decades has been how, aided by their counterparts in Whitehall and Brussels, the officials who run our local authorities have become separated from the communities they used to serve. Floating free of political control, they have become a new privileged class, able to dictate their own salaries and extend their own empires, paid for by a public to whom they are no longer accountable.

But if this gulf has already become wide enough, how much more glaring is it going to become now that the private sector is shrinking so fast? Already last year an astonishing 2.5 million people were in court for failing or being unable to pay ever soaring council taxes. Tellingly, the only response of the Local Government Association to these latest revelations was plaintively to point out that as many as “2,700” council jobs have already been lost in the economic downturn. But outside those walls three millon may soon be out of work. Who will then be left to pay for those salaries and pensions that our new privilegentsia have arranged for themselves?

How appropriate that Kenneth Clarke should become “shadow” to Business Secretary Peter Mandelson. As fervent “Europeans”, both men know that almost all the policies of the ministry laughably renamed the Department for Business, Enterprise and Regulatory Reform are now decided at “European level”. There is therefore hardly any job left for them to do. Mr Clarke will be free to continue advising Centaurus, one of the largest hedge funds in Europe. Lord Mandelson can carry on running the Labour Party, But the last thing either will want to admit is that all the powers they claim or seek to exercise have been handed over to Brussels.

The Government last week announced that in March it is to sell off 25 million “carbon credits”. These European Union Allowances permit industry and electricity companies to continue emitting CO2, ultimately paid for by all of us through our electricity bills. Last summer, when these permits were trading at 31 euros each, this sale might have raised more than £500 million pounds, Today, however, thanks to the economic meltdown creating a surplus of credits no longer needed, their value is dropping so fast that Mr Darling will be lucky to get £100 million. That should help reduce our electricity bills – even though Mr Darling will merely have to extract the cash from us in other ways.

TO LEAVE THE EU

Politicians are failing to tell the truth, but so are almost all wanabe Politicians and Snivil Cervants.

The fact is that even if EVERY British MEP wanted change in The EU it would achieve NOTHING.Every single British Politician, of EVERY Party, elected since before we joined the EUropean Common Market, has promised to change The EU’s CAP – In 40 Years they have achieved absolutely NOTHING!

To try to put a value on OUR Freedom is as futile as floccipaucinihilipilification and as odious as the metissage of our societies, as we rummage in the ashes of our ancestors dreams, sacrifices and achievements, the flotsam of our hopes and the jetsam of our lives, consider the Country and Anglosphere which we leave our children and the future, with shame!

PLEASE POST THIS TAG AS FOLLOWS:ON YOUR eMAILS & BLOGS, FORUM POSTINGS & MAILINGS – GET THE MESSAGE TO THE PEOPLE IT IS OUR BEST HOPE AS WHOEVER IS APPOINTED WILL MAKE NO DIFFERENCE AS PROVED!

I SUGGEST – since there is clearly no political party of repute, advocating or campaigning for withdrawal of these United Kingdoms from the EU and restoration of our independent sovereign, democracy, with Justice & the right to self determination in a free country. Deny the self seeking & meaningless wanabe MEPs the Mythical Mandate for which they clamour. Diktat is imposed from The EU but Law should be made at Westminster, for our Country & our Peoples.

Write Upon Your Ballot Paper: