Who is the deadliest warrior in history?

For this, I will tell you a story—a story about the most ferocious and deadly 21 warriors I have ever had the pleasure of studying. This is the modern Thermopylae, only better. It’s lesser-known in the West because this battle did not involve Greeks—it involved Indians.

On September 12, 1897, twenty-one Sikh Indian soldiers would make a stand that would live on in history as one of the greatest battles ever fought. 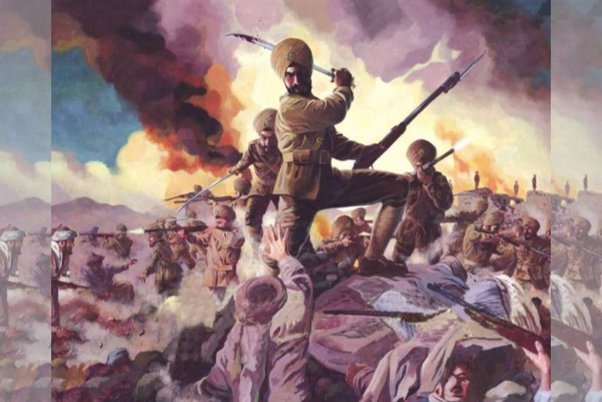 The Battle of Saragarhi.

A bit of background

The Sikhs were Indian warriors aligned with and under the command of the British. They were deadly, skilled, and ferocious in a fight. 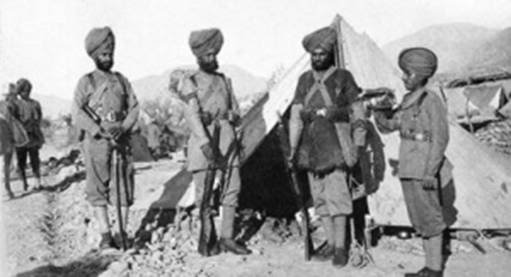 In the 1890s, the British were trying to conquer Afganistan and it was becoming a severe challenge. As the Russians and Americans would learn, Afganistan is not a place easily conquered.

A revolt breaks out towards the end of 1897 and Afgan tribesmen rally in the tens of thousands to the rebel banner. They begin to march towards British forts to push them out of their home.

Soon a rebel army arrives at a series of British forts and the fight begins. 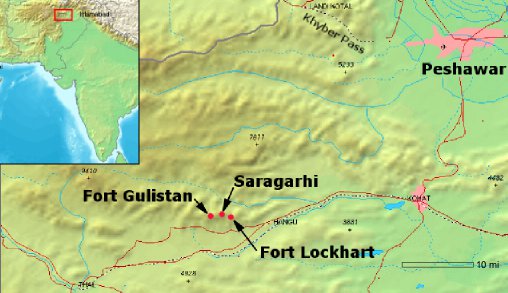 The British forces are locked away in Fort Lockhart and from there they see a massive army on the horizon—numbering some 10,000-12,000. The British are dangerously outnumbered and they prepare for a siege.

A signaling outpost some miles away, called Saragarhi, is manned by 21 Sikh warriors. The Sikhs are informed that an army numbering 10,000 is quickly approaching. The Sikhs request help, but the British inform them that they cannot assist, as they cannot leave the fort unguarded.

The Sikhs could run or surrender—the Afgan tribesmen would show them mercy. But the leader of these brave men, Ishar Singh, tells his men they will stay and fight.

The board up the gate, get ammunition stockpiled, and prepare to defend their small compound from an overwhelming force.

The Afgan army approaches and the fighting begins.

The Afghans send a massive charge to overwhelm the fort but disciplined and accurate rifle fire from the Sikh warriors is enough to break the charge and send the Afgan warriors running.

A second charge appears. This time the Afghans come in even greater numbers. The Sikh fire is unable to break the enemy lines and before too long, the Afgan tribesmen are climbing over the walls. A tough melee fight ensues with rifle butts, swords, and bayonets.

Again though the Sikhs hold, killing hundreds. They turn back the massive force and maintain control of the fort.

By this point, the Afgan forces have taken significant losses, considering this is a lightly manned signaling post. But several Sikhs have died as well.

Bhagwan Singh is the first to be killed in the fighting and his body is taken to the courtyard. Another warrior named Lal Singh is wounded and out of the fight.

One thing to note—this is all known not only from secondhand accounts but also the signalman, Gurmukh Singh. While all of this was happening he continued to send reports to the British at Fort Lockhart.

Now the Sikhs are down to 18 fighters the battle continues.

The Afgan army offers terms of surrender. They offer wealth, safety, power, and whatever else the Sikhs could want if they will just lay down their arms. The Sikhs boldly refuse.

The Afghans light fires to the hillside clouding everything in smoke. The signalman soon gets word that a formation of Afgan warriors is approaching the fort from the side, hidden by the smoke.

It’s too late—the Afgan warriors are in the compound.

Ishar Singh along with a few of his men charge the Afghans and another round of brutal hand-to-hand fighting breaks out inside the compound. The Sikhs are relentless and skilled, killing hundreds of attackers and holding their own despite being overwhelmed.

The Afghan warriors keep coming, though, and the Sikhs are being worn down. Pretty soon the outer walls crumble and the Afghans capture that portion of the compound.

Ishar Singh knows things are desperate. He orders his men back to the inner compound to mount a defense. He knows that if they turn their backs and run they will be cut down.

In a moment of utter bravery, Ishar Singh orders his men back and then single-handedly charges the approaching Afghan army. He cuts down warrior after warrior with his sword and pistol, cutting through the ranks of the surprised Afgan army.

After a few seconds, Ishar Singh is overwhelmed and killed—but he has bought his men the time they needed to fall back.

The Sikhs are now defending their fallback point, but the situation is hopeless. The Afghans start chopping at the wooden gate with axes and swords. Before too long they break through and thousands of them come pouring into what remains of the compound.

The Sikhs continue to fight bravely but hopelessly.

At this point, the signalman Gurmukh Singh signals the British to ask permission to abandon his post and take up his rifle. The order is approved and he calmly puts away his signal gear, takes up his rifle, and fixes the bayonet.

By now, he is the last living Sikh in the compound. The British look on as he moves to defend the door to the small building he was stationed in.

The door breaks and enemy charges in. The British watch in awe as Gurmukh Singh cuts down one, then two, then three, and then finally eighteen Afghan warriors. The men retreat and Gurmukh Singh continues to hold the building.

More charge in and he kills another twenty Afghans as the British cheer him on, watching his final battle from the fort using telescopes.

Alone and cut off, Gurmukh Singh killed 40 ENEMY WARRIORS in only a few minutes. What a total and complete you-know-what.

The Afghans are terrified by this. Unwilling to try and take the building again they set it on fire.

As the building burns, Gurmukh Singh shouts his battle cry over and over again.

Shout aloud in ecstasy, true is the great timeless one.

The battle was over—the compound was taken and the Sikhs had lost.

Yet like Thermopylae and other hopeless battles, the deeds of these heroic and ferocious warriors live on in history as one of the great moments of bravery and valor.

The 21 Sikhs had sold their lives at a high cost. While all 21 died, they took 1,400 enemy soldiers with them while injuring thousands more. Estimates from most sources list 600-1400 fatalities, with many more wounded. Either way, these 21 men took a heavy toll on their enemy.

Every Sikh there that day killed 28-50 enemies. This is an insane feat and only shows how skilled and dedicated these men were.

Instead of a paragraph about some thoughts I have, I think it only fitting to record the names of the brave 21 men so that we may all know their names as well as their timeless deeds.

BY:
Alex Mann
M.A in History & Latin (language), Ohio University (Graduated 2016)Updated 1y
Who are the most feared warriors in history?.