‘We’re not the thought police’: New chief inspector says forces must ‘avoid politics with the small p’ – and remember that ‘different thoughts’ are not forbidden … 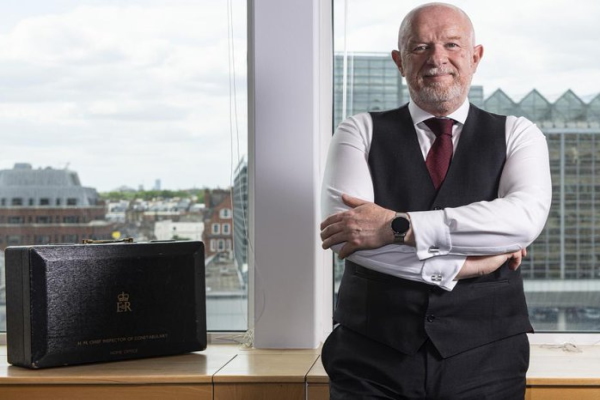 in the light of the first comments of the new Chief Superintendent of Constabulary’s first guidelines, we can but hope that we will see an end to the crass incompetence of the Police in recent years, and the promotion of criminals within their ranks who seem all too willing to see our Police force befouling the hard-earned reputation of the Police in former times.

It was quite clear that Cressida Dick was directly responsible for the murder of Jean Charles de Menezes yet she was promoted without trial to Metropolitan Police Commissioner and those who carried out her orders in such an amateur and ill-trained way were never brought to book, but directly after their murder, it is understood they were sent, with their families, to Spain, on holiday, to place them beyond the access of an enquiring media!

Under the aegis of the new more competent regime, it is to be hoped that in Wales there will not be the obscene bias regarding policing amongst the majority over the bigotted enforcement & dishonest bias towards the minority language of Welsh, or for that matter, we can but hope the Police will act in a more principled manner when investigating and prosecuting real crimes.

Let us hope we no longer see Police in uniforms turning a blind eye to criminals defacing buildings and statues, memorials and affixing stickers based on race hate! We can but hope we never again see Police participating in racially divisive rituals like taking the knee or escorting and participating in demonstrations inciting division. The Police have no role in the allocation or promotion of the Politically Correct mantras of student bodies or such vile racist gangs as BLM who are merely a corrupt and vile display of racism following in the footsteps of Black Power and The Weather Underground.

Nor should the Police participate in the promotion, in any way, of such divisive & hate-inspired bodies as The Nigerian Police Federation or The Black Police Federation within the British Police – there should be no such organisations within the British Police or any other public body in Britain any more than it is acceptable to divide public organisations along the lines of faux gender or sexuality, religion or race.

To see it accepted, in publicly funded or any institution in Britain, examples of discrimination should not be possible – whether it is a student body trying to oust, unseat or deplatform an organisation or individual, for actions within the law, there should be zero tolerance of the discriminator on any grounds. I happen not to be a Christian but I appreciate within these United Kingdoms the laws and guidance are based, in the English language, on broadly Christian values.

If that is not acceptable to you then clearly you live in the wrong country and are welcome to leave. Minded that a fundamental value of Christianity is tolerance of the views, values, creed, colour or race within the framework of British Law – hence discrimination is not tolerated.

To recruit based on race, colour, religion, gender or sexuality is very clearly an example of discrimination, that should not exist within a civilised society. There is no such thing as ‘positive discrimination’, it is by definition, irrefutably discrimination and evil. Discrimination is at the root of much evil and should be stamped out, hiring & promotion should be based on ability, not genitalia or prefered usage of same, just as beyond specific needs there should be no colour, race or language barriers or preferences.

‘We’re not the thought police’: New chief inspector says forces must ‘avoid politics with the small p’ – and remember that ‘different thoughts’ are not forbidden 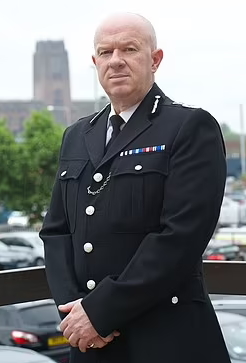 Andy Cooke, Her Majesty’s chief inspector who oversees the assessment of forces and make recommendations for improvement, said police should focus on tackling crime and not on politics

Police should focus on tackling crime and not on politics, said the new chief inspector of constabulary on Sunday.

Andy Cooke, Her Majesty’s chief inspector, said: ‘We’re not the thought police, we follow legislation and we follow the law, simple as that. Policing is busy enough dealing with the serious offences that are going on, busy enough trying to keep people safe.’

Cooke was appointed as HM Inspector of Constabulary and HM Inspector of Fire & Rescue Services in April 2021 – the role includes overseeing the assessment of forces and making recommendations for improvement.

He went on to say: ‘It’s important that the prioritisation that we give is to those most at risk, and that policing stays away from the politics with a small p, and the different thoughts that people have.

He spoke out amid controversy around some police forces treating issues such as misogyny and transphobia as hate crimes.

In the year ending March 2021, there were 124,091 hate crimes recorded by the police in England and Wales.

‘Hate incidents’ can remain on police records and could turn up on enhanced vetting checks by the Disclosure and Barring Service (DBS).

‘Policing needs to ensure the public can have confidence that the police will take action against criminality, whatever level that is,’ Cooke told the Times.

‘Obviously the serious criminality needs to be addressed. But right through [to] neighbourhood crimes, burglaries and car theft as well.’

Cooke’s predecessor, Sir Tom Winsor, previously warned against the influence of ‘thought crime’ on the police force, adding that chief constables must remember they ‘enforce not create’ the law

The news comes after the Home Office revealed that police are solving the lowest proportion of crimes ever, with only six per cent of all crimes resulted in a charge in the year to September 2021.

The figure is equivalent to only one in 17 offences being solved, with Cooke adding crime rates were now the worst in his 36-year career.

Many crimes such as burglaries, robberies and shoplifting, and sexual offences, were going unpunished, he added.

Modern policing has become more complex because of the sophistication of modern technology, often involving cybercrime or online scams.

What are ‘non-crime hate incidents’?

Non-crime hate incident reports were introduced in 2014 following recommendations by the independent Macpherson Inquiry into the murder of Stephen Lawrence.

They are ‘any non-crime incident which is perceived, by the victim or any other person, to be motivated by a hostility or prejudice’, according to the College of Policing’s guidance on hate crimes.

Reports of non-crime hate incidents can show up in criminal record checks for six years, yet there are no grounds to appeal against them.

This means non-crime hate incidents will still exist but the guidance around their use will be tightened.

He also encouraged officers to help route out corrupt colleagues,

In order to regain public trust, officers need to go back to basics such as house-to-house calls and CCTV evidence.

Mr Miller, who describes himself as ‘gender critical’, launched the legal bid after an anonymous complaint was made about dozens of allegedly ‘transphobic’ posts on his Twitter account concerning changes to gender recognition laws.

The 56-year-old was visited by police at work and threatened with prosecution if he did not stop discussing the issue, and was told that the matter had been recorded as a ‘non-crime hate incident’.

Judge Victoria Sharp ordered the College of Policing to come up with new ‘safeguards’ to make sure that any future recording of non-crime hate incidents does not disproportionately interfere with the legal right to speak their mind.

The case established that recording of ‘non-crime hate incidents’ by police forces in England is an unlawful interference with freedom of expression.

After the ruling, Priti Patel said the home secretary will try to enshrine in law a new code of practice that controls the way officers record such incidents.

Patel confirmed in March that Andrew Cooke was her preferred candidate to become the new Chief Inspector.

He sparked anger when he said even violent criminals are ‘not inherently bad people’ and that he would rather pump billions into cutting poverty than upholding the law.

But he also oversaw the jailing of dozens of multi-millionaire drug lords, gained a reputation for tough policing and for being a keen user of stop-and-search powers.

A video chat between a pro-Brexit pundit and David Starkey in which the historian used the phrase ‘damn blacks’ is to be officially recorded as a ‘non-crime’ hate incident despite the investigation being dropped.

Darren Grimes was interviewed by police on suspicion of stirring up racial hatred after Dr Starkey appeared on the Brexiteer commentator’s Youtube channel.

But the Metropolitan Police dropped the case after a backlash from free speech campaigners and withdrew their invitation to interview Mr Grimes and Dr Starkey under caution.

They confirmed no further action was being taken and that no offence took place. However, the incident will still be recorded as a hate crime allegation, police said, and could show up on future checks.

The interview in question, which appeared on Mr Grimes’s Reasoned UK YouTube Channel on June 30 last year, came at a time when Black Lives Matter protests were occurring regularly around the country following the death of George Floyd in Minneapolis.

Dr Starkey had told Mr Grimes: ‘Slavery was not genocide otherwise there wouldn’t be so many damn blacks in Africa or in Britain, would there?’

Douglas Kedge, 85, penned a letter to a woman protesting about an episode of Emmerdale in which a couple decided to terminate a pregnancy after the baby was diagnosed with the condition.

He wrote that although he understood some may regard having a child with Down’s as a ‘great privilege and joy’, there are other ‘perfectly decent people’ who may wish to avoid what could be an ‘appalling change in their lives’.

Mr Kedge sent the note to Rachel Mewes, who has a three-year-old child with Down’s syndrome, in response to a letter she sent to The Times last November.

Ms Mewes, a disability campaigner, then complained to police – and Thames Valley Police later called Mr Kedge to inform him that a record had been made of his involvement in a ‘non-crime hate incident’.

But former parish council chairman Mr Kedge told MailOnline that he fears he will now be remembered as a ‘victimiser’ despite living a ‘virtuous’ life and dedicating himself to public service.

He said: ‘I am absolutely appalled that I now have a police record. I’m 85 and I have lived a fairly virtuous life up until now. I worked as an English teacher since 1957.

‘I was chairman of the parish council and been the governor for two schools. But now at the age of 85 I find I have a police record. I am annoyed, very annoyed.

‘The police have branded me a ‘suspect’ of a hate incident for writing a letter defending a woman’s right to abort a baby with Down’s syndrome. They have described Mrs Mewes as the victim, which makes me the victimiser.’