WHICH CONTROVERSIAL historical figures are worthy of statues in prominent public places, and which are not?

I have no great love of Edward Colston, and it’s historically correct to say that he made a great deal of his wealth from the slave trade. But in the name of historical accuracy and balance, it is also important to point out that he funded hospitals, schools and churches in an era when the state couldn’t be bothered with such things.

In the recent past, an online petition proposing to remove the statue from its plinth in Bristol and put in a museum was signed by 10,000 people, in a city with a population in excess of half-a-million.

Yes, there is room for fresh debate as to the future of such a statue, and I, personally probably would choose to have it moved from a plinth in a prominent public street to a museum. However, such a decision should be taken as a result of public consultation and rational discussion rather than by mob rule, as we saw last weekend.

The statue of Sir Winston Churchill in Parliament Square, London

In London, the statue of Sir Winston Churchill was vandalised (though thankfully it was swiftly repaired), and with the prospect of further protests this weekend, it has been temporarily boarded up.

Churchill’s legacy is complex and controversial. There was a time when his name had an almost magical quality to it in British politics, but in more recent times, public awareness has grown of his role in such events as sending in the army during the Tonypandy riots of 1910, when he was Home Secretary. Churchill expressed regret over this some 40 years later.

But whatever his faults, the whole nation owes a tremendous debt of gratitude to Churchill for the leadership he showed during our darkest hours of World War II. It was a case of ‘cometh the hour, cometh the man’. If it wasn’t for Churchill’s courage, stubbornness and decisive, clear leadership, the very right to freedom of speech and expression may well have been lost forever, and the ‘Black lives Matter’ protesters do well to remember that.

The very same protesters would do well to examine their own morality. Almost all historical figures that are widely admired have controversial pasts. That includes those figures revered by the left. For example, during George Floyd’s funeral on Tuesday, protesters gathered around the statue of Nelson Mandela in Parliament Square.

Mandela’s legacy is a mixed one. On the one hand, his message of truth and reconciliation was a powerful and correct one for the years after the evils of Apartheid. He was generous towards those who had wronged him, and he had a personal warmth and humility that was hugely appealing.

But on the other hand, by Mandela’s own admission, he was no saint. Indeed, he did not buy into the ‘sainthood’ persona others portrayed of him in later life. His time as president of South Africa was far from a roaring success. There was a huge amount of cronyism, corruption, a failure to effectively deal with the HIV/AIDS epidemic, and Mandela himself enjoyed close relations with unsavoury characters including Fidel Castro, Colonel Gaddafi and Yasser Arafat. The ANC itself was an especially brutal organisation during his 27 years in prison, when his second wife, Winnie Mandela, was a pivotal figure. Peter Hitchens’s 2004 documentary, ‘Mandela: Beneath the Halo’ is a good place to start when analysing Mandela’s complex legacy.

Is Mandela worthy of a statue in a prominent London location? In my view, yes. But ‘Black Lives Matter’ protesters would do well to acknowledge that Mandela, like Churchill, leaves a complex legacy.

Similarly, close to where I live in Cardiff Bay, a statue of Mahatma Gandhi was erected in 2017. Gandhi was also a complex figure, who was often wrong. For example, in his early life, Gandhi expressed racist attitudes towards South African blacks, though he moderated his views in later life. There are currently calls for a statue of Gandhi to be removed in Leicester. Once again, that would probably be an excessive move, but even his greatest admirers should acknowledge that his life was not without blemish.

Furthermore, Archbishop Desmond Tutu, still very much alive, and sure to have statues erected of him when he passes on, is championed as a hero of the struggle against Apartheid and is a Nobel peace Prize laureate. But his track record of anti-Semitism over many decades shows a deeply unpleasant side to his character.

Talking of anti-Semitism, it was astonishing to witness former Plaid Cymru leader Leanne Wood actively encouraging the mob in Bristol with their removal of the Edward Colston statue and then throwing it into the harbour. We know from the Jeremy Corbyn experiment that the hard left has a tendency to think of anti-Semitism as a sort of ‘lesser racism’, not as important or as significant as racism against black people or Muslims, partly because they caricature and associate Jewish people with business and great wealth.

The party Wood led between 2012 and 2018 has a long and murky track record of anti-Semitism which it refuses to confront or condemn. Plaid Cymru has a history of anti-Semitism stretching back to its founder, Saunders Lewis, but it remains an ongoing trait with the party. As recently as last December’s general election, Plaid Cymru member Sahar Al-Faifi was suspended days after she appeared in a party election party when it was revealed she had been responsible a number of ant-Semitic social media posts several years earlier. She has since been allowed back into the party.

It would also be wrong to assume that Plaid Cymru has gone to great lengths to distance itself from its past. Saunders Lewis is still widely revered by Plaid Cymru supporters and the Welsh nationalist movement in general. They can be rather touchy when you raise the subject. At best, they seem to regard Lewis’s antisemitism as a minor character flaw, like leaving the toilet seat up after using it.

Lewis’s writing is littered with numerous grotesque examples of anti-Semitism. A repeated phrase of his is ‘Hebrew Snouts’, which he uses when referring to Jewish financiers, with Alfred Mond being a favourite target of his.

Lewis had an affection for the politics of Franco, Salazar and Petain. Plaid Cymru officially remained neutral during World War II. Some senior figures openly advocated that a German victory would be better for Wales. Lewis’s anti-Semitism and support for fascism became a target for opponents of the party and an embarrassment to some of its supporters, including the writer Ambrose Bebb (the grandfather of former Conservative MP Guto Bebb).

Of Hitler himself, Lewis declared: “At once he fulfilled his promise—a promise which was greatly mocked by the London papers months before that—to completely abolish the financial strength of the Jews in the economic life of Germany.”

Plaid Cymru’s neutrality during World War II did not stem from Christian pacifism but from their own nationalist opposition to Britain, which they saw as a greater threat to Wales than Hitler. In the late 1930s, the party’s internal newspaper cited Jewish influence over the British media as a source of the drive to war.

Of  English children being evacuated to Wales to avoid the bombing of their homes during the war, Plaid Cymru said that that would completely submerge and destroy all of Welsh national tradition. Saunders Lewis went on to say that the movement on population is ‘one of the most horrible threats to the continuation and to the life of the Welsh nation that has ever been suggested in history.’

So, there we have it. Hitler and Mussolini were friends of the nationalists, but English children escaping the ravages of war were the enemy.

Plaid Cymru doesn’t like to mention or discuss, let alone condemn its own murky past. Indeed, former party President, Lord Dafydd Wigley, who will have known Lewis personally, called for the ‘character assassination’ of him to end during a 2015 interview, as though Lewis’s abhorrent views were a minor footnote in his life.

In 2015, on the 30th anniversary of Lewis’s death, Wigley unveiled a plaque commemorating Lewis outside the house in Penarth where he lived in later life. Unlike Edward Colston’s Bristol statue, that was erected in 1895, Lewis’s plaque was put up at a time in living memory for all of us.

The Welsh nationalist movement’s links to fascism and anti-Semitism go far deeper, but don’t expect the mainstream media in Wales to talk about it, thanks partly to the actions of Lewis himself.

Lewis perceived the early development of radio broadcasting in Wales to be a serious threat to the Welsh language, and as time went on he even went as far as to accuse the BBC of ‘seeking the destruction of the Welsh language’. At the same time he also recognised that if he could exert influence and pressure on the BBC, the Corporation could become a useful tool to serve Plaid Cymru’s political ends. 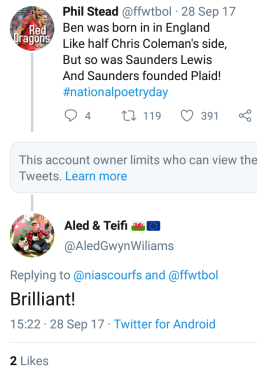 In October 1933, the University of Wales Council, which had been lobbying for more Welsh language broadcasting, appointed a ten-man council to press the case with the BBC, which included Lewis, his fellow Welsh nationalist W.J.Gruffydd, former Liberal Prime Minister David Lloyd George and his nephew William George. (I would welcome any help with names of the other six members of the Council, as I have been unable to trace them so far.)

BBC Director General John Reith described the Committee as ‘the most unpleasant and unreliable people with whom it has been my misfortune to deal’. Yet the Committee gained ever more influence on the BBC in Wales. Appointment of staff at BBC Wales was delegated to the Committee by the Corporation, and as newspapers of the time noted, appointees seemed primarily drawn from the families of the Welsh-speaking elite including “the son of a professor of Welsh and the offspring of three archdruids”.

Lewis’s campaigning succeeded in cementing a strong Welsh nationalist influence at BBC Wales that continues to this day. The BBC’s Welsh Advisory Council was established in 1946, which included several Plaid Cymru supporters, one of whom was Lewis’s successor as Plaid Cymru president, Gwynfor Evans.

And so the seeds were sewn. A nepotistic culture has existed at BBC Wales in the decades that have followed, and former BBC Wales, Panorama and Newsnight journalist Phil Parry has outlined the modern-day close relationship between BBC Wales and Plaid Cymru here.

The Welsh nationalist movement, which has serious problems with abusive behaviour from its activists on social media and in real life, have shown little or no intention of addressing their own hugely murky past, and by continuing to revere Saunders Lewis and other extremists, they are not worthy of mainstream respect. Unlike Mandela, I struggle to find many redeeming qualities about Lewis at all.

All those who encouraged the ‘mob rule’ removal of Edward Colston’s statue and approved of the defacing of Churchill’s ought to reflect on the reality that pretty much all widely-revered figures, on both the left and right, are not the saintly figures they are often portrayed as.