I am bemused how so many supposedly intelligent people have been so easily duped over Climate Change and particularly how easily they have managed to conflate pollution in general with Climate Change.

Let’s look at the fundamental aspect of Climate Change which has in one way or another been a constant of this planet for some 600,000,000 years, through perioda of non stop rain that have lasted for 10,000 years and similar periods when magma spewed out of the ground. Periods ofr ice age that lasted for centuries, to date we seem able to identify about 29 periods of ice age and thus climate endlessly changes through the ages.

Climate Change has clearly been driven by The Sun, Plate Tectonics and Volcanic Action not to mention various asteroids and meteorites!

Even the layout of our current landmasses has varied from Pangea through Gondwanna to the present day when even now the subductive and emergent plates are slowly but surely moving our present continents and plates – as some mountains are steadily growing others are eroding – thus to talki of mankind having any input of consequence whatsoever is palpable and provable nonsense as we have only emerged as a species very recently in geological time.

Last Monday, our politicians unanimously waved through changes to the Climate Change Act (2008) which, if passed through the Lords, will commit us to cutting greenhouse emissions to net zero by 2050. In doing so they committed us, up and down the country, to making changes in how we live which are ‘unprecedented in their overall scale’. These are the words of the Committee on Climate Change (CCC) which recommended the 2050 target.

The CCC has welcomed Parliament’s action with delight and will begin the busy work of ‘providing advice on the detailed path to net zero’. However, in recommending the 2050 target, the CCC has already done a great deal of this work. This is set out in the very report that recommends net zero and is used to justify why the CCC considers the target achievable. No doubt our politicians have read the report’s 277 pages and so they know full well what they have signed us up to. For others, I’ll provide a summary.

Firstly, the CCC estimates that the cost of hitting the target will be 1-2 per cent of GDP per annum through to 2050. UK GDP is in the order of £2trillion so that is a cost of £20billion to £40billion per year. For comparison, we spend £40billion on schools per year.

The CCC is aware that the target is tough and therefore that the changes outlined in its report will mostly be necessary, not optional. It says: ‘In one sense, the key difference is that [the previous] 80 per cent target has the flexibility not to pursue some abatement options, whereas a net-zero target requires that all opportunities to reduce emissions are taken’ [my italics]. So here is a taste of our lives to come:

Page 170 (on the PDF) of the CCC Report says: ‘Achieving net-zero GHG emissions for the UK will rely on a range of speculative options that currently have very low levels of technology readiness, very high costs, and/or significant barriers to public acceptability.’ Significant barriers to public acceptability, you say? Our ‘representatives’ wave it through parliament anyway . . .

Given that our parliamentarians have united in cheering all this on, it is hard to work out where the desperately needed scrutiny and challenge will come from. Perhaps we have to hope that virtue signalling has indeed taken over politics and that none of them actually means it. With the CCC due to report on detailed actions next year, there won’t be much room to hide if legislative changes don’t start to happen soon.

Both Boris Johnson and Jeremy Hunt have more or less indicated they will stick to the target. But perhaps whoever becomes Prime Minister will say that they weren’t aware of the fine print. While the CCC has estimated the cost at 1-2 per cent of GDP for the next 30 years, Philip Hammond and the Treasury have already suggested that it is much higher. A new Prime Minister should surely ask for a comparative analysis between the two sets of costings and then could perhaps use that as a get-out clause.

Currently the UK has a GHG reduction target of 80 per cent by 2050. Therefore the ratcheting up of required changes is to achieve the extra 20 per cent reduction. Remember, that is 20 per cent of the UK’s 1-2 per cent of global emissions. Drastic lifestyle changes from each and every one of us, for ever, to achieve global emissions reductions of 0.2 to 0.4 per cent? While China continues to build coal power plants and global emissions continue to rise.  Could a new Prime Minister really claim that this makes sense? I think I know what the Brexit Party will think.

This the first of three articles we are publishing on the absurdities of the UK’s climate change policy researched and written for The Conservative Woman by leading economist Ruth Lea.

MUCH has already been written on the Government’s recent commitment to a ‘net zero’ greenhouse gas (GHG) emissions target by 2050 following the Committee on Climate Change’s recommendation as our ‘contribution to stopping global warming’.

Doubtless, much more will be written. The Chancellor has warned of the costs, suggesting such a policy could cost £1trillion.

Others have argued this is an underestimate. But, putting aside the economics, the most obvious question is whether adopting this policy will actually have much impact on man-made global GHG emissions. And this is irrespective of the view you take about the link between GHG emissions and climate change. Indeed, it risks just being a very expensive gesture, as the major emitters appear to have little intention of following our heroic example. It has not gone unobserved that, whilst we have committed to the 2008 Climate Change Act which insisted emissions should be 80 per cent lower in 2050 than in 1990, few countries have followed our ‘lead’. It is most improbable that they will follow our ‘lead’ now. Assuming this is the case, the Government’s ‘net zero’ policy will have a minuscule impact on global GHG emissions. Our ‘net zero’ politicians are pursuing a quasi-unilateral, low-carbon, high-cost, fantasy.

It is no secret that the UK is now a minor GHG emitter but, in the absence of a rational debate on our ‘contribution’ to GHG emissions, this point needs to be repeated over and over again. The direct impact of UK’s decarbonising ‘green’ credentials on world emissions must be kept in perspective. We have all but shrunk into irrelevance as a GHG-emitting nation.

The most readily available data relevant to this debate are from the International Energy Agency (IEA), which provides timely figures on carbon dioxide emissions from fuel combustion. CO2 emissions are the most important of the greenhouse gas emissions. According to the US Environmental Protection Agency, CO2 accounts for around three quarters of total GHG emissions, whilst methane accounts for around 15 per cent and other gases, including nitrous oxide, for the remaining 10 per cent.

Chart 1a shows that the UK, the 16th greatest emitter in 2016, accounted for just 1.1 per cent of CO2 emissions, having fallen from 2.7 per cent in 1990. Our emissions were dwarfed by China, which contributed over a quarter, the USA (still 15 per cent, despite a drop in share) and India. 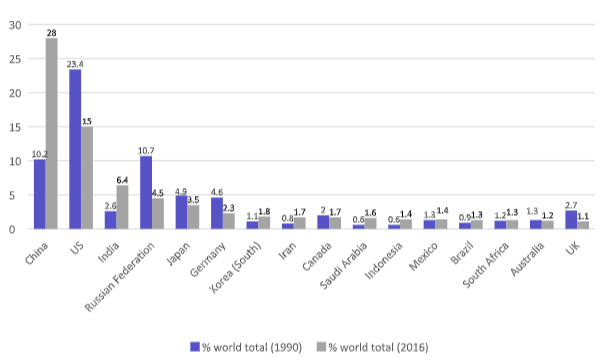 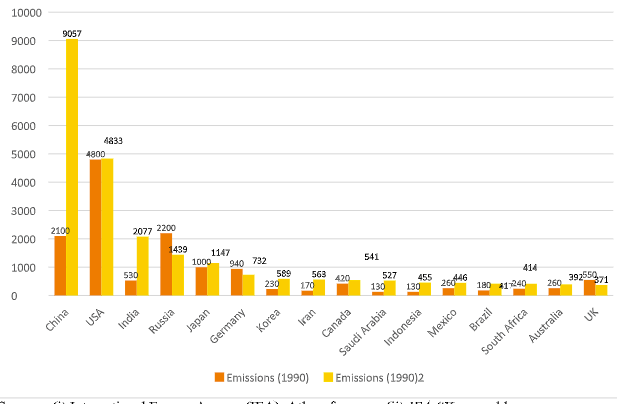 Chart 2 shows the change in their CO2 emissions between 1990 and 2016 for the top 16 emitters (ranked as in 2016), as well as the global total. Over this period global emissions rose by nearly 60 per cent, driven in particular by threefold increases in China’s and India’s emissions. With the exception of Russia, where the large fall in share reflects widespread industrial closures after the collapse of the USSR, the UK’s cuts were proportionately the largest of the featured economies, followed by Germany. 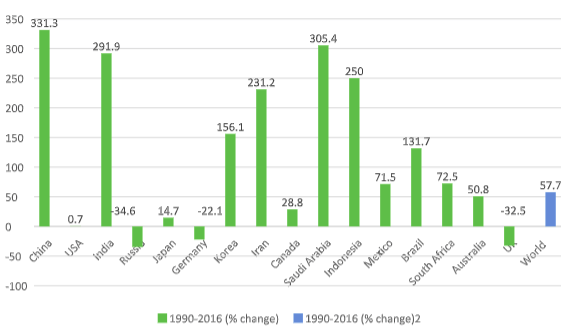 One fairly recent study which estimated the emissions associated with trade was released by Carbon Brief, which looked at the data for 2014, two years before the IEA data quoted above, but the conclusions for 2014 are almost certain to be valid for 2016.

Suffice to say, the UK’s zeal in clamping down on domestic emissions merely risks the raising of electricity prices, damaging UK industry’s international competitiveness and transferring economic activity from the UK to overseas exporters. Indeed, it is more than plausible that this has already occurred.

The IEA data quoted above relate to 2016, but some later data are now available. BP, for example, recently released data for 2018, which showed that global energy demand grew by 2.9 per cent in the year and carbon emissions grew by 2.0 per cent, faster than at any time since 2010-2011.

They said that their report highlighted ‘the growing divergence between demands for action on climate change and the actual pace of progress on reducing carbon emissions’. Indeed it does. Moreover, coal consumption and production increased at a faster rate than at any time in past five years, driven by India and China.

BP’s findings confirm the doubts expressed over the efficacy of the 2015 UN Climate Change Conference held in Paris in curbing global emissions. Before the conference, participating countries were asked to submit their ‘Intended Nationally Determined Contributions’ (INDCs) covering their energy policies and emissions expectations for the next 15 years (to 2030). As reported by Christopher Booker, these INDCs showed that almost all of the high emitting ‘developing’ economies expected to raise their CO2 emissions substantially by 2030.

The BP report is most timely. It really does confirm that China and India are pushing ahead with coal and global emissions are rising. Moreover, emissions can be expected to continue rising, despite our government’s determination to ‘decarbonise’ the British economy.