24 days, a farcical EU election based on the collapse of reason and the huge achievement of EUkip in raising the shiboleth of BNP MEPs whilst even capitalising on the abject political failure of the LibLabCon only increasing their share of the vote by 0.30% but due to political collapse of the 2.1/2 main political parties EUkip risibly obtained 10 unearned MEPs over and above the possible 3 they would have had, had it not been for the expenses/allowances furore in the HoC and the resultant panic by the media when they realised they had opened the door for the BNP to capitalise on the huge efforts made by EUkip’s leadership to promote awareness of the BNP.

EUkip leadership even managed to befoul its own nest, not only with its farcical selection process but also with its association with the extremist fascist political groups like Searchlight and UAF or whatever who seek to control and bully society into a pro EU multiculti slurry of Fabianesque, Common Purpose, Communism et al.

Meanwhile throughout we have a member of the EUkip inner sanctum together with the leader and others openly promoting lies and dishonesty to gain votes by deception and one of their number going as far as to seek to abuse the Court process to raise money for the pro EU Searchlight with its criminal associations!

Throughout the media were serving the people of Britain ill by failing to honestly clarify the secondary allowances debacle whilst conducting something of a witch hunt to promote circulation. Sadly YOU & I are the losers as it is OUR parliament which is being so evilly denigrated and further debased, which of course suits the scum that have risen to control for and on behalf of The New World Order slime that are The EU and its masters.

Yet another nail was driven into the heart of our democracy recently with the glib appointment of yet more EU parasites in our HoL with amongst them the Kinnocks & Mandelson and I am sure my blog on Malcolm Pearson’s written question, dealt with at:
http://gl-w.blogspot.com/2009/06/g125-if-treasury-accepts-shoddy.html

& we note already that EUkip’s vote is in collapse back towards its expected nor of 1-5% with the by election at:

UK Independence Party 82 a mere 5.1% more in keeping with reality than the % lent them for the EU election where you note they had an insignificant gain when all was in their favour and their local elections were risible as ever.

Yet another nail in the coffin of our democracy was perpetrated with the farce of annointing John Bercow as Speaker.

as many an MP is discovering:

It takes a lifetime and many good names to CASH in and make a good reputation
BUT
Just a thoughtless moment of arrogant hubris
to cut the ribbon
&
Squander it on a gift of stolen money for your daughter.

or building an extension and having a romp in the Hay.

But Lord Hailsham would have squirmed with shame & probably
had the honour to drown himself in the moat!

But the penny ante venality of Westminster MPs

is absolutely nothing compared with the wholesale and institutionalised criminal theft
being colluded in by corrupt MEPs – YES every single one of them is guilty.

To steal tax payers’ money whether to promote or denigrate The EU is immaterial.

There is no such thing as GOOD corruption!

They should each and every one of them face the Courts,
NOT for their theft of public money which has involved few of them
But for their conspiracy to collude to defraud HMR&C.

MPs and MEPs are not above the law.

Best they remember that although they have wittingly authorised public executions
of innocent citizens by an out of control Police Farce –
as yet the public are NOT authorised to act as a lynch mob despite the
encouragement of the meeeja, The Telegraph and the irresponsible like Guido.

However if the politicians continue to act as if they are above the law and police
continue to kill citizens it becomes no longer acceptable to protect them
from the lynch mob.

Police YOURSELVES on the same terms as the people who employ you
or face Public Executions at the hand of the Lynch Mob YOU have sanctioned!

My friend’s comment was apertaining to Nadine Dorries and was sent to The BBC:

Nadine Dorries has said this morning that only three Conservatives voted for him. With respect, Nadine, that isn’t the point. Bercow was caught red-handed over his second ‘home’ capital gains tax. He’s as tainted as the rest, and in any other place than the un-world of Parliament would be facing prison (and repaying some of it isn’t the point either, Mr. Bercow).

I very much hope he is strongly opposed at the election and beaten at the ballot box. He doesn’t deserve anyone’s vote, let alone to become Speaker.

But there’s yet a still more worrying issue: we need to clean up Parliament, not neuter it. It may seem a small point, but MPs should be masters of their house, not subject to the civil service. Any removal of Commons authority, such as telling MPs how they may manage themselves, takes sovereignty away from the people and puts it in the hands of shadowy people behind the scenes. Will the new expenses authority be elected? Will they stand on hustings and subject themselves to scrutiny?

There should be full transparency about the financial affairs of parliament, most certainly, but not an abrogation of responsibility!

The fix for this mess is to put good men in parliament, for which you don’t need PR, but attention paid by us the electorate to the CHARACTER of the individuals we’re asked to vote for. Bercow’s track record is not that of a reformer but an opportunist, no matter what he’s now claiming. It’s not his political position that worries me, it’s that expenses claim, as it reveals what’s really in his heart.

We should be restoring parliament to what it ought to be — the place where our best people make our laws — not turning it into some sort of living museum.

Bercow is as suitable for this task as Arthur Daley.

You will I am sure, enjoy Ms. Dorries opinion of the oily little main chancer Bercow as expressed in The Mail CLICK HERE

Ms Dorries believed that it was only 3 Tories who voted for Bercow but Nick Robinson as ever authoritarian claimed it was 4 on the today programme – Personally I am surprised it was so few as I would have thought that more would have wanted to be rid of the poisinous and duplicitous little dwarf, with his ever roving eye for the main chance as he curried favour with all who could advance his career by the expedient of selling out his friend and his principle as I doubt he had more than one of either at any one time! 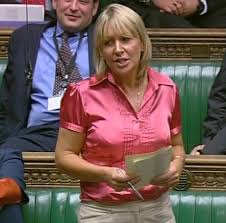 Nadine Dorries shows she has much to offer Parliament on a day when she is clearly in the pink! Providing much in BedsOnSunday which is hardly surprising though I note Paul has moved to The NotW!

Nicknamed Nads amongst her friends it is perhaps fortunate she did not take up tennis for the chanting on centre Court of Go Serina seems entirely more appropriate!
I have reason to believe the comment was made based upon belief, one with which I concurr, however I would fully understand if he made the posting because like Ms Williams of tennis fame she has impressive TITles, or so it stated on Ms. Williams’ T Shirt the day before yesterday

– for those who do not know her Ms. Dorries is MP for Bedfordshire and was trained as a nurse thus bringing a certain forthright practicality to her job as an MP.